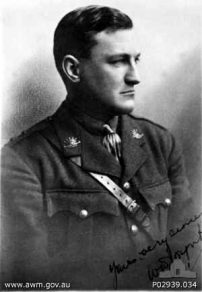 Joynt was born at Elsternwick, Melbourne on 19 March 1889 and educated at The Grange Preparatory School and later Melbourne Boys’ Grammar School; he spent a period studying accountancy before trying his hand in growing cotton in Queensland, as a pastoralist in Western Australia, wheat farming in Victoria and finally at Flinders Island.

Joining the Victorian Rifles in 1911, he enlisted in May 1915 whilst at Flinders Island and after attending Officer’s Training School arrived in Egypt as a reinforcement with the 8th Battalion with the rank of 2nd lieutenant. His first major battle was at Polygon Wood during the Third Battle of Ypres in September 1917, and the following year during the German advances of April 1918 came to the fore as a leader of men during the stirring defence at Hazebrouck that saw the 1st Division play a large part in saving the channel ports of northern France. It was during an assault at Herleville Wood near Chuignes on 23 August 1918 that saw Joynt receive the Victoria Cross. His citation read in part;

“For most conspicuous bravery and devotion to duty…his company commander having been killed…he immediately took charge of the company, which he led with courage and skill…Dashing out in front of his men, he inspired and led a magnificent frontal bayonet attack on the Wood…and a very critical situation was saved”.

Wounded three days later, Joynt did not see further action again, his commission ending in June 1920 with the rank of captain. A foundation and life long member of Legacy, Joynt was instrumental in 1926-27 in lobbying for the support of the Shrine of Remembrance concept along with William Blackett (q.v.) and also for putting forward the motion in December 1925 that Legacy broaden its charter that the welfare of the dependants of departed comrades be the principal task which was overwhelmingly accepted and subsequently adopted nationally. In civilian life, he established “Colarts Studios Pty Ltd” initially undertaking advertising work, later expanded in 1929 until the depression enabled an opportunity to purchase a printing press. In 1923 a parent company of “WD Joynt & Company Pty Ltd” was formed, and by the 1980s was employing over 150 people with a substantial premises at Blackburn North.

After serving on the home front during the Second World War, Joynt was placed on the retired list on 10 October 1944 with the rank of lieutenant-colonel and at the time of his death on 5 May 1986 was the last surviving Australian recipient of the Victoria Cross from the Great War. On 10 March 1932 he married Edith née Garrett; they had no children.