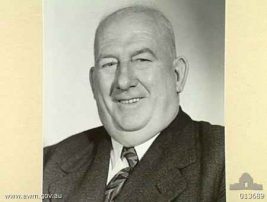 Born at Beechworth, Victoria on 14 February 1881, the son of Timothy Keane a police constable. After his education at Christian Brothers’ College, St. Kilda he joined the Victorian Railways as a clerk (1897-1925). By 1918, Keane was on the rise and held office with the 20,000 strong Victorian Railways Union and later the national body, serving as general secretary (1925-29). He oversaw the application of federal award coverage, but it was against Prime Minister Stanley Bruce’s (1883-1967) attempt to dismantle the Commonwealth Arbitration Court with the introduction of the Maritime Industries Bill in August 1929 that marked Keane’s graduation from the hard school of union office to the corridors of power.

In 1925 he unsuccessfully attempted to gain election to the Senate and later the Victorian Legislative Council seat of Melbourne South, but at the October 1929 general election that saw the defeat of Bruce’s government, he won the Federal seat of Bendigo (1929-31). By 1931, the economy was in tatters and (James) Scullin’s (Melbourne General Cemetery) Labor Party was swept aside in a landslide; Keane had no chance and resumed his involvement with the Australian Railways Union. In 1934 he again unsuccessfully recontested the seat before his election to the Senate (1937-46). Six feet tall (183cm) and over twenty stone (127kg), Keane was described as “one of the most picturesque personalities in the Senate, a big man in his breadth of vision as he was in statue…and a fairly fluent speaker with a deep penetrating voice” he was regarded as one of the shrewdest parliamentarians, fair to an opponent and a straight talker; in 1943 Keane was quoted as describing (Sir) Keith Murdoch (1885-1952) as “a damn scoundrel”. Deputy leader of the Opposition (1938-41), on the election of the (John) Curtin (Karrakatta Cemetery) Labor government in 1941, he became Minister for Trade and Customs (1941-46); his ministerial career was described as “arduous but not particularly noteworthy”. As minister, he was charged with the heavy task of administering rationing and price control to an unsympathetic nation which did not always make him popular nor did his straight talking help, describing restrictions on beer and clothing as “minor inconveniences”.

Described as the life of every diplomatic party (“robust, laughing voice and rollicking songs”), he collapsed suddenly on 26 April 1946 while in Washington, USA attending to trade matters. Prime Minister (Joseph) Ben Chifley (1885-1951), a pallbearer at his state funeral officiated by Archbishop Daniel Mannix (1864-1963) on 31 May, on hearing of his death while in London attending a Prime Ministers’ Conference said – “I have lost a valued colleague”. Residing at 56 Wanda Road Caulfield, he was survived by his second wife Millicent née Dunn (d 1973) their daughter and his children from his first marriage to Ruby née Thorne (d 1923) who are both interred with Keane.