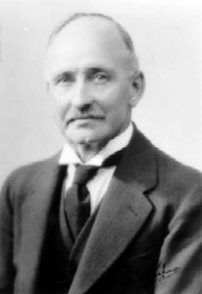 Born at 142 Johnston Street, Fitzroy on 13 April 1866 the son of William Kershaw a taxidermist and Elizabeth née Boyde and educated at the Alma Road State School, St. Kilda and East St. Kilda Grammar. Developing a love of natural history at an early age from his father whom he accompanied on his many field trips, in October 1883 Kershaw followed in his father’s footsteps at the National Museum and was later appointed Frederick McCoy’s (q.v.) assistant who trained Kershaw in general zoology and museum administration. He later succeeded his father as taxidermist in 1891 taking charge of the entomological collection which he devoted much of his time. His position gradually increased in importance and he was placed in charge of the natural history collection until McCoy’s death in 1899 when the Museum was transferred to the Public Library site under the directorship of (Sir) Baldwin Spencer (1860-1929); Kershaw was made curator of the zoological collection (1899-1929). He later succeeded Spencer as director (1929-31) until his retirement in April 1931 when Daniel Mahony (Melbourne General Cemetery) was appointed in his place.

He travelled widely on field trips for the museum notably the Bass Strait islands (1908, 1909), the Barrier Reef in Queensland (1913) and Western Australia (1921) collecting ethnological and zoological specimens; however his greatest contribution was the acquisition of Henry White’s (Muswellbrook Cemetery) vast and meticulous collection of birds and eggs after his death in 1927. Described as “kindly and sincere and popular with young people”, Kershaw was also a driving force with others behind the reservation of Wilson’s Promontory as a National Park in 1908, serving as first honorary secretary (1908-46). Member of the Royal Society of Victoria (1900-46), he later served as president (1918), honorary secretary (1920-23) and librarian (1924-25).

Survived by his wife Elsie née Brown and three sons, he died on 16 February 1946 at his home at 11 Wrexham Road, Windsor.