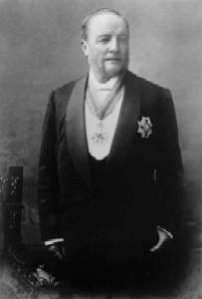 For over forty years a towering force in the field of Natural Science in Victoria, McCoy was born Roman Catholic in Dublin the second son of Simon McCoy a qualified physician and professor at Queen’s College, Galway; his date of birth has been a source of dispute amongst historians.

McCoy’s path to greatness was unconventional as it was extraordinary. A renowned geologist, palaeontologist and museum director in Great Britain before his arrival in Australia on Boxing Day 1854 as one of the original four professors of the newly founded University of Melbourne (1854-99), McCoy was an intellectual aristocrat; set in his ways and inflexible in his thinking to adapt to Australian conditions he was everything the selection committee wanted – “of such habits and manners as to stamp on their future pupils the character of the loyal, well-bred English gentleman”.

Neither a politician, reformer or advanced thinker, McCoy was essentially a scholar and museum director: his teaching methods were theoretical and practical field work was shunned much to the ire of the students which led to the establishment of chairs in Chemistry (1882) and Biology (1887); as a member of the Victorian Zoological Society, in 1862 he urged the introduction of exotic species including the English song-bird and the rabbit as a reminder of “the varied touching, joyous strains of those delightful reminders of our early home”; as chairman of the royal commission on the colony’s mineral resources (1856) he was ignorant to the potential of deep gold reefs believing it to be theoretically impossible and disagreed with the commission’s secretary Jacob Braché (German Cemetery, Northcote); an anti-Darwinist, he argued there was no geological proof of the Genesis phases of creation; and finally, in a protracted and bitter controversy that lasted for over thirty years he fought a losing battle with Rev William Clarke (North Sydney Cemetery) over Palaeontological theories on the age of Australian coal.

Described as “strongly built, of medium height, ruddy of countenance with waved reddish hair, side whiskers and a determined chin”, McCoy’s contribution to the advancement of natural science lies in the National Museum of Victoria which in the last decade of his life was recognised internationally as one of the world’s great national history museums. With a dogged determination, considerable tenacity and a cavalier disregard of financial procedures, McCoy fought to keep the collection at the university under his control, and at the time of his death the collection amounted to some 510,000 specimens valued at £40,000; a naturalist who stayed indoors, the Museum was used solely for scientific research and education. Idle museum shows were ignored.

Residing at Maritima – South Road, Brighton Beach, McCoy died on 13 May 1899 and was buried with Church of England rites; in January 1891 he became the first professor of an Australian university to be knighted.