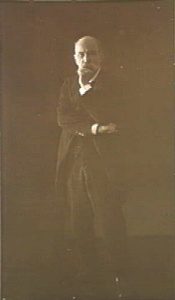 One of Australia’s most famous and popular artists, McCubbin was born on 25 February 1855 at 165 King Street, Melbourne, the third of eight children to Alexander McCubbin (d 1877) and Annie née McWilliams; his parents arrived in April 1853 from Curvan, Ayrshire, Scotland trying their luck in the gold boom. After a formal education young Fred worked for a time as a solicitor’s clerk where he was sacked for seeing a pantomime; his father noted his artistic inclinations and found work as an apprentice with a coach-painter.

Around 1870, McCubbin was enrolled in the newly formed Artisans’ School of Design at Trades Hall, Carlton then the only form of art institution available but later joined the National Gallery of Victoria. At the School of Design (1871-82) under Thomas Clark (c1814-1883) and OR Campbell (St. Kilda Cemetery) he gained an appreciation of life drawing; and later at the School of Painting (1877-85) under Eugene von Guerard (1812-1901) and George Folingsby (Boroondara Cemetery) his work was being highly acclaimed notably “Home Again” (1884) which won the 1884 Student’s Exhibition and shows the Folingsby characteristics of controlled lighting and dramatic subject matter. But while McCubbin acknowledged Folingsby’s influence as “a great stimulus” who taught the fundamentals of art his discouragement of open air painting somewhat restrained McCubbin’s development.

The turning point came one Saturday afternoon in 1885. Tom Roberts (1856-1931) had just returned from overseas and living in Fitzroy when the two went painting at Studley Park where McCubbin wrote “for the first time I got awakened to the beauties of the Australian landscape”; “Picnic at Studley Park” (1885) and its equal focus on foliage and figures best illustrates this change. These outdoor painting trips – to the farmlets of Box Hill, the banks of Gardner’s Creek, the hills of Hawthorn and the beaches of Mentone – were joined by (Sir) Arthur Streeton (Ferntree Gully Cemetery), Charles Conder (1868-1909) amongst others and the famed Heidelberg School was born ushering in a period of art uniquely Australian in spirit that was to continue for more than four decades.

Whereas Roberts excelled in landscape, McCubbin’s paintings emphasised life. With an in depth attention to the subject in reflective poses, McCubbin’s unique style captured the nostalgia of the bush life amid the developments of the 19th century; amongst the classics include “The Lost Child” (1886), “While the Billy Boils” (1888), “Down on his luck” (1889), “On the Wallaby Track” (1896) and “The Pioneer” (1904). In 1886, McCubbin was appointed drawing master at the National Gallery (1886-1917) encouraging a generation of art students to develop a style of their own including Clarice Beckett (Cheltenham Memorial Park), Merric (q.v.) and Penleigh Boyd (q.v.), the sculptor Charles Gilbert (Coburg Cemetery), James Quinn (St. Kilda Cemetery), Hugh Ramsay (St. Kilda Cemetery), Reginald Sturgess (Williamstown Cemetery), and Jane Sutherland (Box Hill Cemetery).