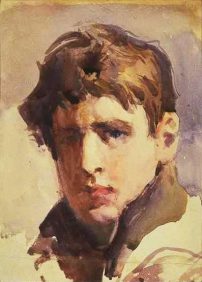 Boyd was always destined to become an artist. He studied at the National Gallery School (1905-09) under Frederick McCubbin (q.v.) and Bernard Hall (1859-1935); by the time he left for Europe in early 1911 to spend two years in London and Paris, Boyd already had some fine paintings to his credit. His time in London (April 1911-May 1912) was spent more in the presence of his Chomley cousins, but while at St. Ives, Cornwall he followed in his parents footsteps by having “Springtime, St. Ives” (1912) exhibited at the Royal Academy (“praised for…rendering the distant glitter of sunlight on water”); in Paris (May 1912-Jan 1913), E Phillips Fox (q.v.) was a close friend and neighbour who influenced Boyd by introducing the en plein air technique which can be seen in “The Seine, Paris” (1913) (“characteristic use of cool colours and broken brushwork”). On 15 October 1912, he married Edith née Anderson (1880-1961) (“she was intelligent as well as beautiful…it was in nearly every way a perfect match”) and they had three children; Robin (1919-71) became a noted architectural critic and writer. On returning home in 1913 to stage several profitable exhibitions in Melbourne and Sydney, Boyd had the world at his feet – an enchanting bride, a studio at Chelsea and success at the Royal Academy with his best work yet to come.

Renowned for his lyrical and poetic paintings, his love of the Warrandyte area (1914-23) figures prominently in many of his works including “The Breath of Spring” (1919) (“acclaimed as a tour de force”), “Wattle blossom” (1919), “Spring fantasy” (1919), “’Twixt shadow and shine” (1921) (“a Cootamundra wattle tree mantled in glorious bloom”) and probably his most famous work “The old bridge, Warrandyte” (1914), noted by a critic as “a clever impression of an effect of sun on mellow decay, as reflected in gently flowing waters, blue with the intensity of a cloudless sky”.

In August 1915 he enlisted for active overseas duty (“he despised coldfoots and shirkers”) and served with the Australian Electrical and Mechanical Mining and Boring Company (1915-18) rising to the rank of sergeant before being gassed at Ypres, Belgium and invalided to England; his creative outlet to the war was to produce “Salvage” (1918) a series of pen and ink drawings. But the war seems to have affected his judgement and he made some uncharacteristic decisions leading up to his tragic death.

Described by a friend as “radiant, able, full of happy courage and enterprise”, his life was cut short when he was killed instantly in a car accident near Warragul, Victoria on 28 November 1923 while driving to Sydney. The Age described Boyd at the time of his death “as without doubt one of the greatest painters of landscape Australia has produced”. Though the passage of time has not been kind to Boyd, largely forgotten and overshadowed by other members of the famous Boyd artistic dynasty he is still considered the finest painter of the wattle in bloom through his many evocative depictions; a contemporary wrote;

“comparisons…are odorous, but Boyd, I think, will yet stand with [Sir Arthur] Streeton (Ferntree Gully Cemetery) as the greatest of our Australian landscape painters”.

(By permission of the National Library of Australia, nla.pic-an2813253)