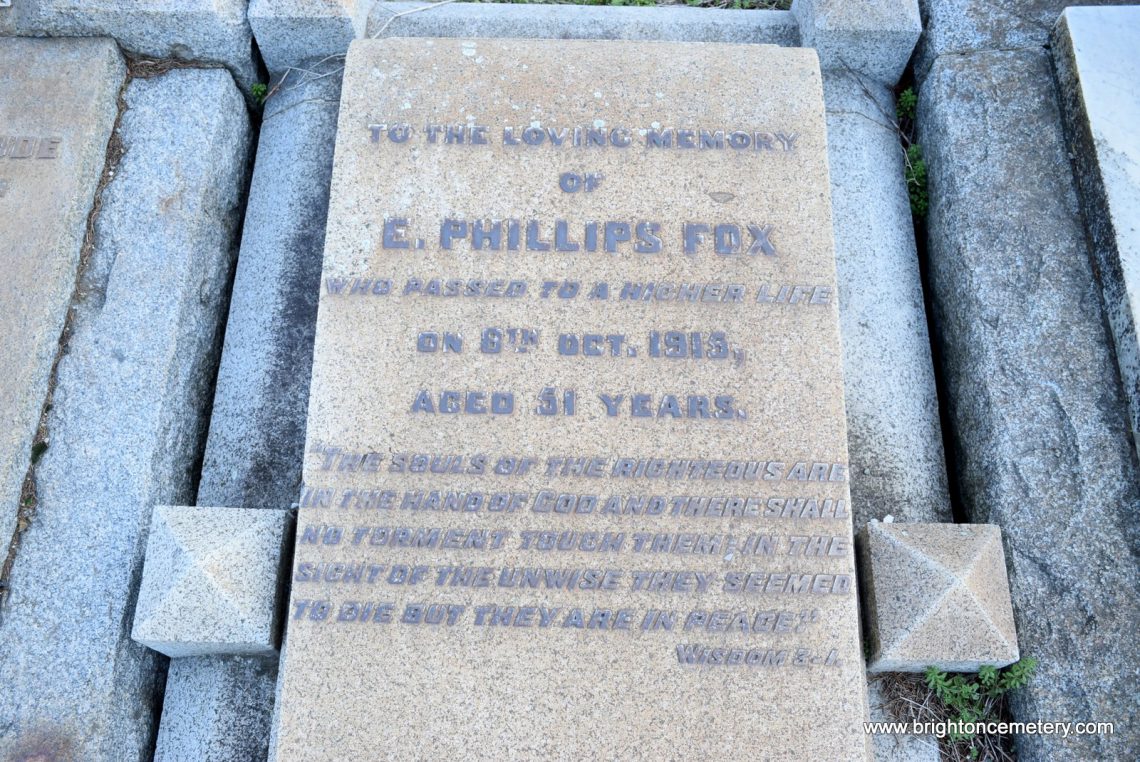 Born at 12 Victoria Parade, Fitzroy on 12 March 1865 seventh child of a Jewish photographer.  Fox took drawing classes at an early age before entering the National Gallery School in Melbourne (1878-86) studying under OR Campbell (St. Kilda Cemetery) and George Folingsby (Boroondara Cemetery); among the fellow students were a cream of Australian artists that included Fred McCubbin (q.v.), (Sir) John Longstaff (1861-1941) and Rupert Bunny (1864-1947).

After graduating, Fox travelled to Europe studying at the Académie Julian in Paris (1887) and Ecole des Beaux-Arts (1889) where he was greatly influenced by the Impressionist style and en plein air technique. He later settled at St. Ives, Cornwall, England in 1890 before returning to Melbourne two years later but continued to send pictures to many of the great European exhibitions; in 1894 he became the first Australian to win the gold medal at the Old Salon for “Portrait of My Cousin” (1893), described as “a fine, sincere piece of portrait composition”. With fellow student Tudor St. George Tucker (1862-1906) in 1893 they established the Melbourne School of Art considered “the most vital art school in Melbourne in the 1890s” with outdoor summer classes held near Eaglemont. Fox’s first notable commissioned work was for the National Gallery of Victoria as part William Gillbee’s (Melbourne General Cemetery) £1,000 bequest to paint a picture of historical significance to Australia which resulted in “The Landing of Captain Cook at Botany Bay 1770” (1902) and later exhibited at the Royal Academy of Arts in 1903.  While residing in London in May 1905, he married Ethel Carrick (1872-1952) a notable artist in her own right and they settled in Paris (1905-13) until just before the outbreak of war before returning to Australia.

Described as “unassuming and reserved”, his career and subsequent popularity may have been different if he had not furthered his studies in Europe. Rather than join other members of the acclaimed Heidelberg School of Art, Fox forged his own path, and while not as popular as McCubbin, Tom Roberts (1856-1931) or Sir Arthur Streeton (Ferntree Gully Cemetery), he is considered amongst Australia’s most gifted colourists and portrait painters; his best works include “Robert LJ Ellery, Government Astronomer, Victoria” (1896), “Al Fresco” (1904), “The Lesson” (1912), “Mrs Penleigh Boyd” (q.v.) (1912), “Henry Gyles Turner” (1914), and “The Arbour” (1910) characterised by the full use of colour and light.

He died from cancer of the rectum on 8 October 1915 after an unsuccessful operation the previous week.