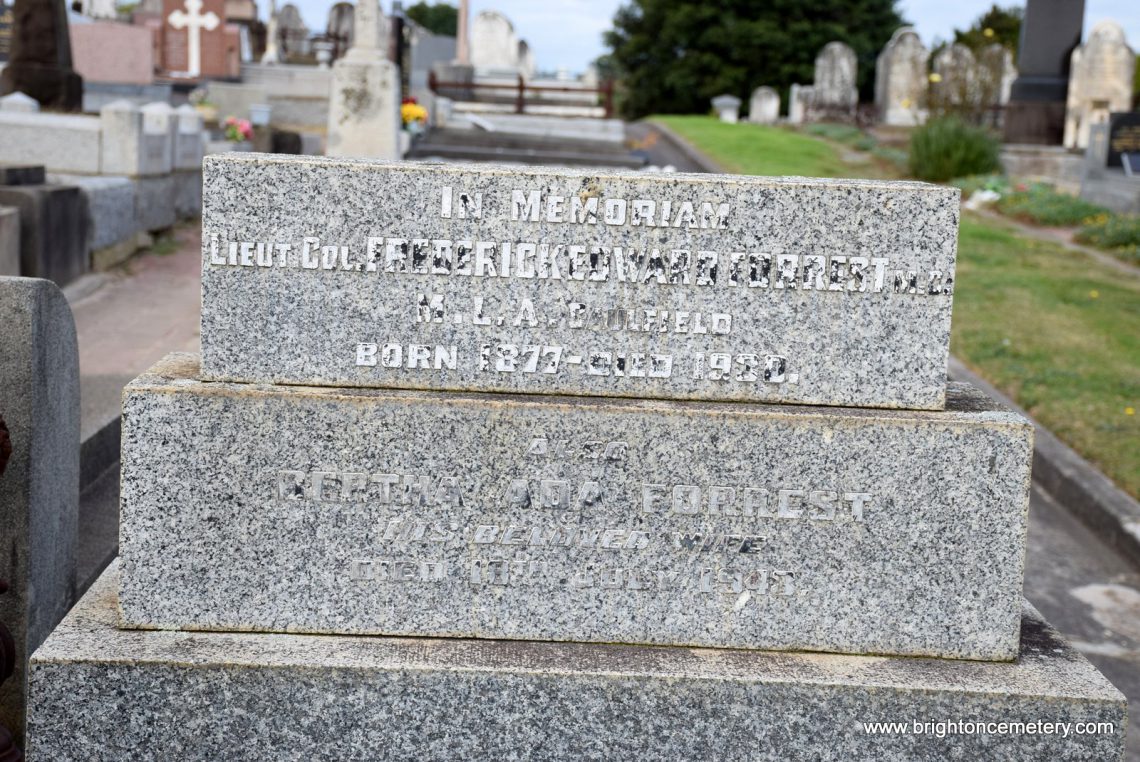 Born at Berlin (Rheola) near Inglewood, Victoria on 9 April 1877 the son of Edward Forrest, a miner. After two years in Queensland, he joined the Victorian volunteer defence forces around 1900 and at the commencement of the Great War, was a sergeant-major with the Field Artillery in Launceston; it was said he was the second man to enlist in Tasmania on 26 August 1914. Sailing with the first overseas contingent with the 7th Battery Australian Field Artillery, he served at Gallipoli where he was wounded rising to the rank of lieutenant by the end of the disastrous campaign. After recuperating, Forrest later served as an orderly officer with the 3rd Field Artillery Brigade (1915-16) and as staff captain with the 4th Division Artillery (1916-17) before being given command of the 110th Howitzer battery in August 1917 the same year he won the Military Cross; his war service ended after a serious wound during operations at Passchendaele in October 1917 and he returned to Australia the following March with the rank of major.

In 1922, with Major-General Sir John Gellibrand (Yea Cemetery), Forrest was instrumental in founding the Tasmanian Remembrance Club and also Legacy in Victoria. He served as Secretary of the Tasmanian RSL (1919-21) before being appointed General Secretary to the Federal branch (1921-24), and was well-known “as one of the strongest and most active guardians of the rights of former soldiers”. After a period in business, he was induced to enter politics and contested the new Legislative Assembly seat of Caulfield (1927-30) standing as a “progressive liberal”; a forceful speaker and able debater, he “scorned the idea of becoming a party hack, as did the efforts to involve him in the frequent party and individual intrigues”. The Geelong Advertiser noted Forrest’s “harmonious, baritone booming voice…with a rapid utterance of speech just a trifle more quick than his reflective process would regard as entirely safe for his own reputation as a statesman”.

He died on 19 October 1930 after an illness lasting several weeks. Over thirty-six members of Parliament attended Forrest’s funeral service, among the pallbearers were the Premier, Edmond Hogan (Cheltenham Memorial Park), the Speaker Sir Alexander Peacock (Creswick Cemetery) and (Sir) Gilbert Dyett (Bendigo Cemetery), Federal President of the RSL. On 14 September 1904 he married Bertha née Graham (d 1943), they had one son and two daughters.