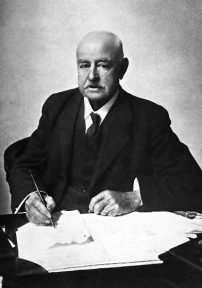 Migrating to Australia with his parents from Ireland, in 1866 at the age of thirteen Fleming began a lifelong association with the doyen of Melbourne stockbrokers – “JB Were & Son” the firm founded in 1839 by the enterprising Jonathan Binns Were (St. Andrew’s Churchyard Cemetery); Were’s son-in-law Sherbourne Sheppard (q.v.) was an old family member of the Fleming’s. In 1881 Fleming left the firm and took a seat on the original Melbourne Stock Exchange founded by H Byron Moore (q.v.) an association that lasted for over forty-five years of daily operating in the ‘call’ room; he witnessed many stirring events including the feverish excitement of the speculative gold-mining days; the meteoric rise of the Broken Hill silver-lead mines; the speculative land boom days and subsequent disastrous financial crash in the 1890s; and the shift towards investing in safe Government securities in the 1900s.

In 1888, Fleming re-joined “JB Were & Son” and was made a Partner (1888-1916) and later Senior Partner (1916-26) responsible for all dealing on behalf of the firm; it was said he effected the largest single transaction of shares ever recorded, selling 15,000 “Melbourne Tramway Co” shares at £8-15-6 totalling some £130,000. Recognised as one of the most skilled operators in the ‘room’, two years before his death he was still an active member of the Stock Exchange attending his office regularly in the morning “as hale and hearty as any man…his brain having lost none of its nimbleness”; he often spoke of the boom in Bendigo and Ballarat mining stocks of the 1870’s and mines such as the “Great Extended Hustlers” which produced over £3 million worth of gold paying out some £500,000 in dividends.

In failing health during his final year, Fleming died on 7 May 1926 aged 72 and resided Manhattan – 121 Brighton Road, St. Kilda.

(Image reproduced with kind permission of JB Were Limited)