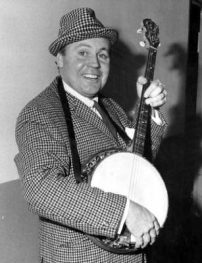 Fitzgibbon was born at Mordialloc on 12 February 1930, the son of Francis (Frank) Fitzgibbon, clerk and Minnie née Mitchell (d 1989). Educated at St. Bede’s College, Mentone, ‘Smacka’ as he was popularly known began first playing the ukulele at an early age before switching to the banjo; his earliest influences were Bing Cosby and Louis Armstrong.

In 1951 he began playing with “Frank Johnson’s Fabulous Dixielanders”, and later with the father of Australian jazz, Graham Bell, before forming his own band with “The Steamboat Stompers”; his first album was “Frisco Joe’s Good Time Boys”. In 1969 he opened Melbourne’s first jazz restaurant “La Brochette” (Studley Park Road, Kew) and later in June 1971 “Smacka’s Place” (Chetwynd Street, North Melbourne) which became a Melbourne institution; his recipe for an enjoyable night out was an ample supply of “good food, good liquor, and good entertainment”. Described as “plump and smiling with a warm and friendly genial personality”, Smacka was a much loved entertainer, a rare breed who left a smile on everyone’s face and a familiar face on Melbourne television shows, notably “Sunnyside Up”, “The Penthouse Club” and “In Melbourne Tonight”. In 1972, the jovial Australian jazzman recorded the title song of the unforgettable movie “The Adventures of Barry McKenzie” which became a best seller.

Having had a malignant tumour removed in 1955, on 1 September 1977 Smacka collapsed during a radio broadcast on 3LO; in July 1979 he was told the end was neigh and died from a cerebral haemorrhage on 15 December aged 49 survived by his wife Faye née Hommelhoff whom he married on 31 October 1959 and four children; daughter Nichaud went on to become a noted jazz entertainer “thrilling audiences with her distinctive, smouldering style for many years and is regarded as one of Australia’s finest jazz stylists”. Several thousand attended a rather colourful funeral service – “Mass for Smacka” – with Frank Traynor’s “Jazz Preachers” playing the New Orleans hymn “Oh Didn’t He Rumble” for the funeral march in honour of the man described “as Melbourne as the Yarra (river)”.

On 8 November 2004, a tribute show “Remembering Smacka” was held at the Arts Centre in honour of the man best remembered “for his popular jazz club, his dapper dress code (spotted bow ties, striped jackets, checked pants and two tone shoes) and his passionate love of vintage cars”.