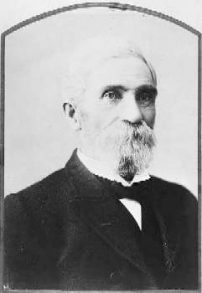 The paternal grandfather of (John) Malcolm Fraser (1930-2015), Prime Minister of Australia (1975-83), Sir Simon was born at Pictou, Nova Scotia on 21 August 1832 and educated locally before migrating to Victoria at the age of twenty-one. On the Bendigo gold-diggings he amassed enough wealth to open a business in Elizabeth Street, Melbourne trading horses and produce from Sydney but soon realised the lack of commercial viability and on the advice of a friend went on to become a successful contractor building railways.

One of Fraser’s first constructions was the Echuca-Bendigo railway line (1864) where he showed an intuitive business mind. Realising no bluestone ballast was available in the area, he instead proposed the use of quartz deposit and coupled with efficient work practices allowed the company to clear £100,000 of which nearly one-thrd was Fraser’s share. Other works included the Deniliquin-Moama railway (1876) and the 200-mile Port Augusta-Farina line (1877) in South Australia. From early in his career, Fraser invested heavily in pastoral pursuits showing a strong resolve to overcome the arid nature of the outback by championing the use of artesian water; at his Thurulgoona estate on the Dawson River (Queensland) he managed to bore some 576,000 gallons of water a day.

Like many successful men, he entered state politics representing the Echuca district in the Legislative Assembly seat of Rodney (1874-83) and the Legislative Council seat of South Yarra Province (1886-1901); in Sir James Munro’s (St. Kilda Cemetery) cabinet he held the position of minister without portfolio (1890-92). Fraser’s passion was Federation. He was one of the Victorian representatives at the Federal Constitutional Convention (1897-98) along with William Trenwith (q.v.); a conservative and ardent imperialist he opposed the move to enfranchise women at federal elections. In 1901 he topped the Victorian poll at the first Federal Senate (1901-13) as an anti-Labor and anti-socialist candidate; The Herald commented “he was passionate in debate, and though a hard fighter, he always proved a generous opponent”. As an ardent Presbyterian, Fraser was for many years Grandmaster of the Orange Lodge (1887-1904) known for his “prudence, judgement and powerful influence”.

He resided at Norla – Irving Road Toorak, and died at a private hospital in Ivanhoe from asthma on 30 July 1919 aged 86 years.