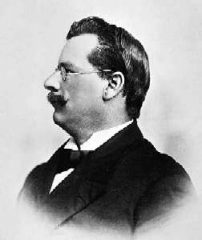 Born to convict parents on 15 July 1846 at Launceston, Tasmania the son of William Trenwith, a shoemaker and Beatrice née McBarrett; he followed his father’s trade and by his late teens was unschooled, barely literate and handicapped with atrocious eyesight. But Trenwith possessed two remarkable gifts that was to make for a remarkable life: a flair for organising and a sharp oratory tongue. With a loose coalition of groups that made up the National Reform League he agitated for protective tariff, a land tax and reform of the Legislative Council; he fiercely defended the action of (Sir) Graham Berry (Boroondara Cemetery) in the ‘Black Wednesday’ troubles of January 1878 that saw many public servants dismissed without distinction including H Byron Moore (q.v.).

The following year he founded the Bootmakers’ Union later serving as its secretary (from 1883) where he gained a reputation as a militant organiser during the great 1884-85 lockout; he fought for the abolition of out-work to eliminate cheap labour. By 1886, he was president of the Victorian Trades Hall Council and a hero in the labour movement but friction remained within the Executive that would threaten his relationship with the rank and file members. Later during the 1892 maritime strike he proved a shrewd strategist but much of the radicalism had gone and he argued for compulsory arbitration over violence.

After a number of attempts to enter the political arena, Trenwith was elected in May 1889 with George Bennett (Boroondara Cemetery) to the double-member seat of Richmond (1889-1903) where he championed the cause of the working class seeking reforms in education, unemployment and tariff protection that would remain his abiding obsession throughout his political career. But as the lone labour representative until April 1892 when an additional thirteen labour-aligned members were elected, his reforms were ineffective and attempts to introduce bills for an eight-hour working day were easily defeated; in (Sir) George Turner’s (St. Kilda Cemetery) Liberal ministry, Trenwith aligned the support of the labour members and served on royal commissions on constitutional reform (1894) and factory legislation (1900). But Trenwith’s shift to the left alienated him from the radicals within the Trades Hall and from the mid 1890s he could no longer rely on the support of the labour movement. Nonetheless, he served as Minister for Railways, commissioner for Public Works and vice-president of the Board of Land and Works (Nov 1900-Feb 1901) in the (Sir Alexander) Peacock (Creswick Cemetery) ministry and briefly as Chief Secretary (1901-02).

Trenwith is best remembered as being the only Labour representative at the Federal Constitutional Convention (1897-98) that led to the Federation of the six Australian colonies in 1901. As the sole representative of the working class, Trenwith’s support of Federation much to the outrage of the labour movement was considered crucial to the success of the subsequent referendum against the charge by the powerful Age newspaper that the Bill had been “wholly shaped in a conservative direction”; he argued passionately at the Convention on the benefits of protection, adult suffrage, and proportional representation. Alfred Deakin (St. Kilda Cemetery) wrote of Trenwith;

“master of a sledge-hammer style of oratory, very loud, very forcible and very logical, he softened away its excrescences of violence, watched and studied the temper of the House and gradually allowed his way through its crowd of speakers into the front rank of its debaters”.

Trenwith later went on to become an Independent Federal Senator (1903-10) but committed the fatal sin of withdrawing his support from Andrew Fischer’s (1862-1928) Labour government and was defeated at the next election.