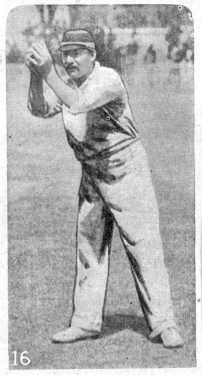 Of the test cricketers interred at Brighton General Cemetery who played for Australia – Laver (q.v.), Ransford (q.v.) and Moule (q.v.) – Harry Trott had the distinction of captaining the national team (1896-98) as well as the first to preside over a series defeat of England. Born at Vere Street, Collingwood, Melbourne on 5 August 1866, Trott was the son of Adolphus Trott, an accountant and Mary née Stephens; his younger brother Albert (1873-1914) also played for Australia as an all-rounder in three tests averaging 102.5 runs.

Harry’s rise as a cricketer began when he first played for Victoria in 1885-86 and went on to win the second Sheffield Shield competition defeating arch-rival New South Wales by three wickets in 1893-94. It was in 1888 that Trott first played for Australia against England at Lord’s in a forgettable debut, averaging just six runs; a further tour in 1890 was no less spectacular, Australia losing 2-0 with Trott averaging 19 runs.

As a batsmen and a handy bowler, Trott excelled when the game demanded a leaders role and by 1896 he was appointed captain of the side in the first of eight tests (5 wins, 3 losses) but an English series defeat still eluded Australia; during the tour the team won 20 of 34 first-class matches drawing eight, only for England to win the series 2-1. Rated by Hugh Trumble (1867-1938) as the best captain to have led Australia, Trott had an uncanny ability to exploit opponents’ weaknesses and established himself as a tactical captain. His finest hour came during the 1897-98 tour at home when he won the series 4-1 heralding the renaissance of Australian cricket. His tactical planning was useful against the Indian-born run machine Kumar Ranjitsinhji by playing two fieldsman ten metres on the off-side with a deep man to save a boundary; while not an overwhelming success it resulted in ‘Ranji’ being caught five times. Trott confessed to doctors to losing sight in one eye during the fifth test in Sydney and he played his last match only to suffer a mental breakdown. Overall, Trott’s record of 24 tests stood at 921 runs at 21.92, 1-100s and 7-50s, 21 catches and 29 wickets for 1019 (av 35.13).

Loved and well respected by many people, Trott died from Hodgkins disease on 9 November 1917 at the age of 51. He resided at 40 Phillipson Street, Albert Park.