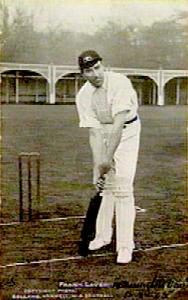 Born on 7 December 1869 at Castlemaine, Victoria the fifth son of a talented family to Jonas Laver and his wife Mary née Fry that included brother William (q.v.); after his education at the local grammar school he worked for a period as a clerk in the Law Department (1887-95) before joining brother Ralph’s (1874-1962) successful fruit preserving business (“Laver Bros” – Cambridge Street, Collingwood), but it was his cricketing skills that earned him wide acclaim.

He first came to prominence at Castlemaine and in 1887 joined the East Melbourne Cricket Club where he captained the side for twenty years during which the club was either premier or runner-up: in the 1892-93 season he made a record 352 not out; on another occasion he scored 258 in just 105 minutes. Laver went on to play for Victoria captaining the side in later years scoring 2,760 runs and taking 108 wickets. Described as a “very solid, though ungainly batsman, a baffling bowler, and a fieldsman at point he had no superior”, he first played for Australia on Joseph Darling’s (Cornelian Cemetery) successful 1899 tour of England (Aus 1-0, 4 draws) and was involved in a further four tours against the Englishmen as either a player or manager (1901-02, 1903-04, 1905, 1909), representing the country in fifteen tests taking 37 wickets at 26.05; his two outstanding performances were 7/64 at Nottingham (1905) and 8/31 at Manchester (1909).

Up until 1909, the players had a right under the constitution to select a player-manager. Laver who was popular with the players was selected for the 1911-12 tour. Instead the Australian Board of Control for International Cricket Matches ignored their wishes and a player revolt led by Clem Hill (North Road Cemetery) ensured who along with Vernon Ransford (q.v.), Warwick Armstrong (Waverley Cemetery), Victor Trumper (Waverley Cemetery), Hanson Carter, and Albert Cotter (1883-1917) all withdrew from the side in support of Laver; only ‘Big Ship’ Armstrong played for Australia again. Writing on his death from a tumour of the brain and cerebral haemorrhage on 24 September 1919, contemporaries praised Laver as a player-manager for his;

“tactful management and clearness of vision…his charming disposition and a magnetic personality” and as one of the best all-rounders to have played for Victoria as “a gangling, heavy-legged six-footer…a forceful batsman, with an unorthodox style and a splendid fieldsman at point”.