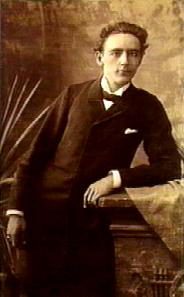 From the talented Laver family of Castlemaine, William was born on 20 August 1866 the fourth of seven sons and brother of Frank (q.v.). Ironically, Laver was considered better skilled at cricket than his brothers and while playing for the local Castlemaine side against the touring Englishmen in 1881, he clean bowled the legendary Dr WG Grace. However, his love of music soon put an end to his cricketing career; Melbourne Punch commented that “sport before literature and art is perhaps the fault of the climate”. A chance meeting with the famous German violinist August Willhelmj led to the recommendation of an education in Germany (“the Mecca of all students desire”) and in 1882 he travelled to Frankfurt-am-Main where he began his studies at the Hoch Conservatorium and became an authority on Wagner; to his last days, he fondly remembered a chance pat on the head from Brahms.

In 1887, Laver turned down an offer to a conducting post in England having heard of the establishment of the Ormond Chair of Music at Melbourne University. Undeterred by his age, he mounted a vigorous campaign to no avail and the controversial George Marshall-Hall (q.v.) was appointed but was undeterred to have a conservatorium of music established. He lobbied the University Council and Marshall-Hall eventually succeeding and in February 1895 the University’s Conservatorium of Music opened at the Queen’s Coffee Palace, Carlton – the first of its kind for a university in the British Empire. Marshall-Hall’s eccentric behaviour and acrimonious dismissal in 1900 led to a rival Conservatorium in direct competition to Laver who was overlooked a second time and served under Franklin Peterson (Melbourne General Cemetery) as vice-director. Marshall-Hall again briefly filled the Ormond Chair in 1915 and Laver finally succeeded a fourth time, being the first Australian born musician to occupy a chair of music in Australia and he served until his retirement in 1925 but briefly returned in 1938 during Bernard Heinze’s (q.v.) sabbatical leave. He overhauled the curriculum to allow greater flexibility on gaining a degree on the practical or theoretical side; he also represented the university on the advisory committee of the Teacher’s Registration Board and was chairman of the University of Melbourne Examination Board (Music).

Laver died on 2 July 1940, survived by his wife Agnes née Robertson a former pupil whom he married on 7 March 1894; he thoroughly enjoyed the misplaced adulation he received during the height of Frank’s popularity as a cricketer. When applying for the Ormond Chair of Music, one well-to-do Toorak matron replied “Dear man, I do enjoy his cricket!”