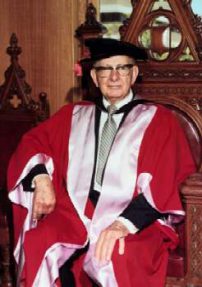 Born on 1 July 1894 at Shepparton Victoria, the son of a German-born brewer and his Yorkshire wife, Minnie née Greenwell. Heinze received violin lessons at an early age at Ballarat under the guidance of Walter Gude (1904-12) and the Melbourne University under Franklin Peterson (Melbourne General Cemetery) before being awarded the (Sir William) Clarke Scholarship at the Royal College of Music in London (1913). But the Great War interrupted his studies and his career was put on hold; he received a commission in May 1916 with the exclusive British Royal Garrison Artillery Special Reserve Regiment and fought at Arras, Ypres, Somme and Passchendaele. In 1923 Heinze returned home and over the following five decades played a central role in shaping Australia’s musical life through “teaching and performance, habits of listening, broadcasting and composition” with great tact and diplomacy.

Succeeding William Laver (q.v.) as chair of the largely private funded Ormond Professor of Music (1926-57), he lobbied the creation of the Faculty of Music under the control of the University Council and thereby able to influence state education policy for the successful introduction of music to the state curriculum. Heinze envisaged a central professional full-time orchestral group and this he was able to achieve by gaining control of two rival orchestras in Alberto Zelman’s (Box Hill Cemetery) Melbourne Philharmonic Society (1927); and Fritz Hart’s (1874-1949) Melbourne Symphony Orchestra (1933) which merged with the University Symphony Orchestra to form the Victorian Symphony Orchestra with Heinze as head conductor (1933-56). But Heinze’s greatest achievement came with the advent of the wireless radio.

As director general of music with the new National Broadcasting Service at 3LO-3AR (forerunner to the ABC), he was able to inspire a generation of Australians to the love of orchestral music that was until then largely a luxury to the upper classes. Fellow of the Royal College of Music in 1931 and knighted in 1949, his last appointment of significance was as director of the New South Wales State Conservatorium of Music (1956-66) succeeding Sir Eugene Goossen (1893-1962) who resigned in scandal. In 1974, Heinze was named Australian of the Year (“recognised for a lifetime contribution to Australian music”) and the following year made Companion of the Grand Division of the Order of Australia (AC).

(Image reproduced with permission from the University of Melbourne Archives, UMA/I/2284)