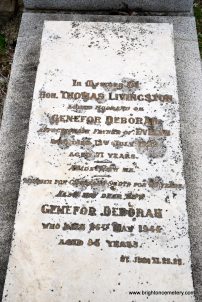 Born at Bathurst, New South Wales on 12 June 1851 and educated at Scarsdale state school, Victoria where the family moved; at the age of eighteen he undertook a teacher-training course that led to teaching in the local area (1870-78) and later at Numurkah (1879-83). In 1883 he resigned and worked as a journalist at Shepparton and went on to own a number local newspaper, including the Numurkah Standard. Selling his newspaper interests in 1887, the following year Livingston founded the “Melbourne Chilled Butter Co” and served as its managing director until 1900; he oversaw the firm’s pioneering export of butter in 1889; the establishment of seventeen creameries throughout Victoria; and further expansions in the export of frozen poultry, rabbits and fruit.

As a MLA for Gippsland South (1902-22), Livingston was atypical of the country politician who represented the interests of the electorate first and foremost; he lobbied for improvements to the roads and railways in the area; opposed provisions of the Factories and Shops Act extending to the country regions; and led opposition to George Swinburne’s (1861-1928) Milk Supervision Bill in 1905. In 1908, along with William Hutchinson (q.v.) and other country faction members, he supported the no confidence vote against Thomas Bent (q.v.) and was thus rewarded as government whip and cabinet secretary in the Murray ministry (1909-12) where he gained much praise, and successive ministerial positions of honorary minister without portfolio (1913-14); public instruction (1914-15); and mines and forests (1915-17). Described as “genial, conscientious and unassuming”, as Mines and Forest minister he was said to have made his greatest contribution with the appointment of the brown coal advisory committee that led to the establishment of the State Electricity Commission; and also as an early advocate against the destruction of the Gippsland forests.

A Freemason and ardent temperance advocate, Livingston died on 13 July 1922 just a week after being elected deputy chairman of the parliamentary country liberals and was accorded a State funeral. He resided at Woornak – 126 Hambleton Street, Middle Park.