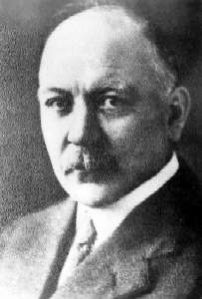 A little known giant of Victorian politics, Hutchinson was born on 31 May 1864 at Stawell, Victoria; the famed Agricultural engineer, HV McKay (Sunbury Cemetery) is a cousin.

His path into politics belies the influence he exerted: educated at the local state school before working as a shop assistant in Murtoa, at Warracknabeal he established his own business as a jeweller. Elected to the state Legislative seat of Borung (1902-20), he became leader of the Country Liberals that wielded enough influence to bring down a government so much so that in 1908 he led the overthrow of Sir Thomas Bent’s (q.v.) Ministry and later chaired the Royal Commission (1909) which adversely commented on Bent’s activities. But Hutchinson was no power hungry leader; he despised political intrigue and demanded loyalty. In 1913 he opposed members of his party wanting to bring down the Watt government and was rewarded with successive portfolios in the Watt, Peacock and Lawson ministries: Water Supply and Agriculture (1913-15); Lands (1915-17); Public Instruction and Forests (1918-20); whilst Minister of Forests he successfully established the State Forests Commission considered his greatest achievement. An efficient administrator noted for his clarity in introducing Bills to the House, Hutchinson was described by Melbourne Punch as;

“a big and burly man with a drooping tan moustache, the typical country shopkeeper type, he is intensely matter of fact, a plain, forcible speaker, concise and trenchant with a rigid code of morals, both political and personal who almost qualifies for the wowser class – a Tory of the Tories”.

A noted Presbyterian and spokesman for the Temperance movement, after his defeat in October 1920, he worked for his cousin and died some years later at his home at 11 Epping Street, East Malvern.