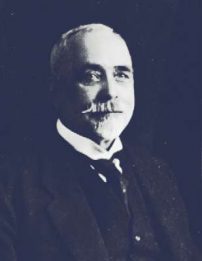 Born in Aberdeen, Scotland, the son of Rev. George Jamieson and Jane née Wallace and educated locally before migrating to Adelaide in 1869; he later tried his luck on the Victorian goldfields before heading to Sydney where armed with a letter of introduction to Sir John Hay (Waverley Cemetery) he found work as a jackeroo in the Lachlan district.

Urged by his boss, George Mair of Grungle Station to take up surveying, in 1881 Jamieson joined the New South Wales public service (1881-85) and was later appointed in charge of the Bourke-Silverton district (1883-85) which included the Barrier Ranges. As luck would have it, Jamieson had been arranged to survey an area that included an unremarkable lease just as the region was coming out of a devastating drought. Here, the original syndicate of seven who had pegged the lease on 5 September 1883 – Charles Rasp (North Road Cemetery) a boundary rider, George McCulloch manager of the Mt. Gipps station, George Urquhart a sheep overseer, C Lind storekeeper and bookkeeper, Phillip Charley a station hand, David James (Kapunda Cemetery) a contractor and his mate James Poole – had each invested £70 and contributing £1 a week towards working the claim. By the time Jamieson arrived, the effects of the drought and an unfavourable analysts’ report soon led to disillusionment within the syndicate. Out of curiosity, Jamieson visited the ‘hill’ and was so impressed that he purchased three shares for £320 when the original seven shares were divided into fourteen to raise additional capital, but he soon had to sell two of them. On Jamieson’s urgings, further tests were conducted in 1885 which led to the discovery of rich silver iron ore; the great “Broken Hill Proprietary Co Limited” (BHP) was born and rest the stuff of romance.

Scoffed as the ‘hill of mullock’, by 1889 a one-fourteenth share was worth a tidy £1,250,000 making the original investors men of great wealth (“Broken Hillionaires”). Jamieson went on to become first managing director (1885) with a salary of £500 per annum and promptly resigned from the public service. Though admittedly inexperienced and suffering from ill-health, he oversaw a large part of the early development including the construction of the smelters as well as selecting the site of the Broken Hill township; he occupied the first house erected in the town. Described as a “six foot moralising ruffian”, after resigning as managing director, he went on to serve on the board of various “Broken Hill Ltd” companies, including the London (1889-92) and Melbourne boards (1906-26), “Mount Lyell Mining & Railway Co Ltd” (1893-1926), “Broken Hill Proprietary Block 10 Co”, “Blythe River Iron Co” and the controversial “Emu Bay Railway Co”. In 1911 with fellow directors, the company embarked on the manufacture of iron and steel with the construction of the steel works at Newcastle.

An ardent golfer and active member of the Victorian Racing Club, Jamieson resided at Clarence – 83 Queen’s Road, St. Kilda where he died from cancer on 8 May 1926; his estate was valued for probate at just £25,194. Amongst the pall-bearers were fellow directors Sir John Grice (St. Kilda Cemetery) and (Anthony Edwin) Bowes Kelly (St. Kilda Cemetery). On 10 July 1890 he married Lily (Helene) née Meyer (d 1948).