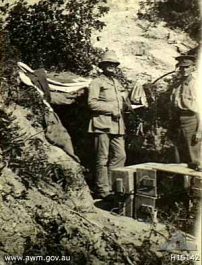 Born on 24 October 1868 at 34 Gipps Street, East Melbourne, the son of Charles Johnston and Elizabeth née Jameson; after his education he worked in the family business. In 1887 he joined the Victorian Field Artillery as a gunner and two years later he gained a commission as a lieutenant. And like fellow Boer War veteran, Edwin Tivey (q.v.), prior to enlisting for overseas service in 1899, Johnston was an elected representative with the Fitzroy City Council (1896-99). Assigned as a Special Service Officer, he was attached with the 62nd Battery, Royal Field Artillery joining the unit at Modder River and after initially being assigned for instructional duties, soon proved himself a valuable officer and fought in operations in the Orange Free State culminating in the advance on Bloemfontein in March 1900. The Australian war correspondent, said of Johnston;

“Captain Johnston would do us credit – nobody, indeed, could be better chosen – if achievement depended only on looking well, and I cannot say that of all our campaigners. In addition, he has provided himself a hard-goer, fearless, enduring, capable. All-round, a first-class artillery officer”.

Invalided to Australia with fever, in March 1902 he re-enlisted as temporary lieutenant-colonel in charge of the Victorian raised 4th Battalion, Australian Commonwealth Horse – the same unit a young Private James Newland (q.v.) served with.

In August 1914, commanding the 2nd Field Artillery Brigade, his 4th Battery unit landed the first 18-pounder field-gun at Anzac Cove on the day of the fatal landing, not an easy achievement considering the rugged terrain; ‘Johnston’s Jolly’ (at Lone Pine) meaning to jolly up the Turks was named after him. For a short period, he temporarily commanded the 3rd Infantry Brigade in October 1915 before being appointed commander of the 2nd Division Artillery the following January. Singled out for the disastrous role of the artillery during the Second Battle of Bullecourt in May 1917, redemption came when he perfected the art of the protective barrage during operations of the Third Battle of Ypres from July to October 1917. In November of that year, he asked to be sent home in protest against Major-General Walter Coxen (Springvale Botanical Cemetery) – his junior – being promoted Corps Artillery Commander during the re-organisation of the force the previous month designed to reduce the number of British officers. Mentioned in despatches four times, in March 1918, Johnston was appointed Military Administrator of New Guinea (1918-20) succeeding Sir Samuel Pethebridge (Box Hill Cemetery).

On his return to Melbourne he resumed his position as managing director of the furnishing firm “Johnston’s Pty Ltd” (Gertrude Street, Fitzroy) founded by his father and continued his service with the citizen forces attaining the rank of major-general on his retirement. Residing at 7 Balaclava Road East St. Kilda, he died at Epworth Hospital on 23 May 1949 aged 80.