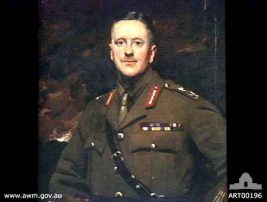 Edwin Tivey who distinguished himself in the Boer War and World War I, was a native of Inglewood, born on 19 September 1866 the son of Joseph Tivey, storekeeper and Margaret née Hayes; the Tivey family is said to be one of Australia’s oldest pioneer families. Educated at All Saints Grammar School, St. Kilda and later Wesley College, Melbourne he was a keen rower but as the Melbourne Punch noted, “no scholastic genius” and afterwards returned to his hometown and became an accountant; in May 1899 he opened a local branch of the Australian Natives’ Association serving as first president.

On 23 March 1889 he “heard the call of the trumpet” and gained a commission as Lieutenant with the Victorian Rangers under the command of Major Alfred Otter (q.v.). A councillor on the Inglewood Borough (1894-99) (“Tivey was not an orator, but he could put his points with clearness and emphasis”) in the Boer War with the Victorian 4th (Imperial) Contingent, Tivey sailed in May 1900 with the rank of Captain in command of ‘C’ Squadron, and by the end of the year was attached to General Henniken’s force in the Cape Colony and Orange Free State. On 11 February 1901, his unit made a forced march of forty miles to Philipstown and surprised the Boer rebels who it was said outnumbered his unit of forty men eight-to-one. Lord Kitchener said in his despatches for which Tivey was awarded the Distinguished Service Order (DSO);

“Captain Tivey, by his well-timed advance and skilful handling of a small force, prevented greatly superior numbers of the enemy from occupying a position which forms the key to Philipstown, and forced them to evacuate the town with loss”.

Arriving back to Melbourne in July 1901, he later enlisted with the 2nd Battalion, Australian Commonwealth Horse, as second-in-command under Lieut-Colonel Duncan McLeish (q.v.). Prior to the commencement of the Great War, he was in command of the Victorian 5th Light Horse Brigade before his appointment in January 1915 of the Officer’s Training School at Broadmeadows; he did not serve in the ill-fated Gallipoli campaign. Described by Punch in 1915 as “forty-nine years of age, of neat build, middle height, crisp appearance, he looks every inch a soldier”, in July of that year Tivey was promoted Colonel in command of the newly raised 8th Infantry Brigade one of the rare examples of a distinguished soldier of the light horse given command of an infantry unit. In Egypt, the brigade was famously labelled ‘The Chocolate Soldiers’ (“Did you pick up all the chocolate wrappers before you left?”) when it transpired that the unit travelled by train from Tel-el-Kebir to Moascar while other units had to endure a gruelling two day march through the desert; later in the war, to be described as one of ‘Tivey’s Chocs’ was to be held in high esteem.

Promoted to Brigadier-General in February 1916, in Belgium and France, Tivey oversaw the brigade through thick and thin, from the bitter failure of Fromelles (July 1916) to the success of the Battle of Amiens (August 1918) where the brigade captured 831 prisoners and 85 machine-guns. He was thrice wounded during the war and gassed in May 1918. Tivey ended the war as temporary Major-General in command of the 5th Division, and was mentioned in despatches six times. But Tivey had his distractors; Brigadier-General Harold ‘Pompey’ Elliott (Burwood Cemetery), the revered commander of the 15th Brigade was “increasingly contemptuous of…Tivey’s pretentiousness, ingratiating manner to superiors, and laughable exaggerations of both 8th Brigade ‘captures’ and trifling personal ‘wounds’” and would write home “no one here has the slightest confidence in Tivey as a commander” after learning of his temporary appointment.

After the war he resumed his earlier profession as a stockbroker he began in 1903; on his 80th birthday he was described as “a silver haired dapper sharebroker who retains his soldierly bearing and attends his office every day”. Tivey died on 19 May 1947 at his home 159 Kooyong Road, Toorak with an estate sworn for probate at £75,303; his only son Major Edwin Tivey (VX15648, Major 2/23rd Battalion, enlisted 17 May 1940) died as a prisoner of war in Italy on 26 March 1943.