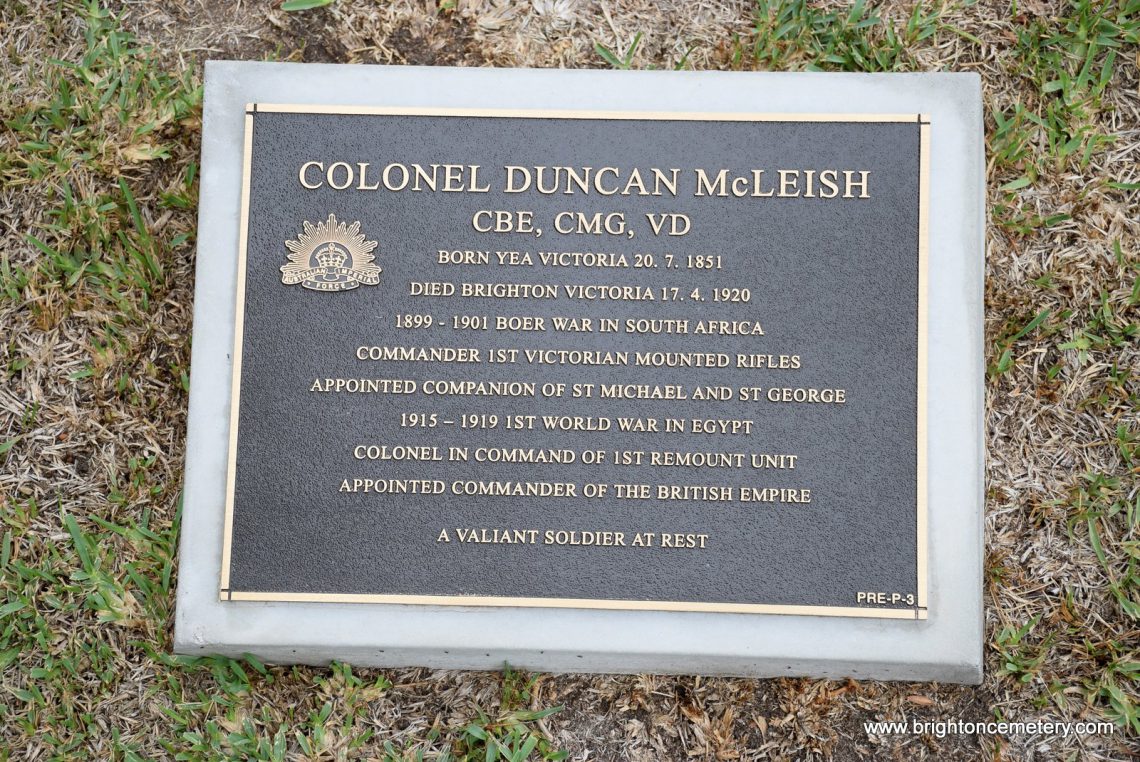 A notable Yea citizen and pastoralist, McLeish was born on 20 July 1851 the son of Duncan and Catherine née Cameron. One of the original officers of the Victorian Mounted rifles on 1 April 1887 with the rank of lieutenant, at the time of his death, McLeish was described as “one of the best known and popular officers of that regiment”.

At the commencement of the Boer War, he was given command of the 1st Company of Victorian Mounted Rifles – the first Victorian military contingent dispatched for overseas service – and attached to the Modder River force in Orange Free State. In late November 1899, the unit was absorbed with the Australian Regiment under Colonel (Sir) John Hoad (St. Kilda Cemetery). Interestingly, before a federated Australia, “this was the first occasion on which a regiment was formed for active service of troops representative of the various colonies”. In the Colesberg district of Cape Colony, a detachment of McLeish’s unit under Major Eddy was attacked by the Boer rebels at Pink Hill, an action that was described by the Australian war correspondent as “a glorious but a fatal day in the history of the Victorian Contingent”. While not directly involved in the heat of the battle, McLeish formed a rearguard action carrying out of danger men of the dismounted Wiltshire Regiment. After the Australian Regiment was disbanded in March 1900 becoming part of the 4th Mounted Infantry Corps, McLeish continued to command his company in operations culminating in the fall of Pretoria in June that year. He returned home in November 1900 and was promoted Lieut-Col, but later returned to the war front in command of the 2nd Battalion, Australian Commonwealth Horse.

Described as “a typical Australian rider, bronzed, lean, sinew, a man of strong character and few words, a crack rifle shot, well versed in bushcraft, and having nothing for the pleasures of town life”, for his outstanding war service, he was appointed CMG, mentioned in despatches and awarded the King’s Medal with one clasp and the Queen’s Medal with six clasps. Placed on the retirement list in 1911, in spite of his health and advanced years, McLeish was involved in the equipping of the Light Horse units in Australia for overseas service, and in September 1915 given command of the 1st Remount Unit based in Egypt (1915-19).