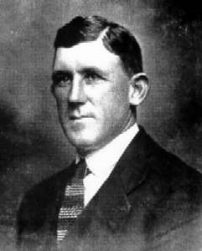 Born on 22 January 1887 at Boosey near Yarrawonga, Victoria the son of Michael McNamara and Mary née Quinlan. First playing for Benalla Football Club, in late 1905 McNamara’s long kicking and outstanding agility came under notice of South Melbourne but in the interest of team balance was overlooked and instead joined St. Kilda (1905-09, 1914-15, 1918-19, 1921-23); at six feet four inches (191cm) and fourteen stone (89kg) he was an immediate sensation at centre half-forward booting four goals on debut and two years later, he helped the club reach its finals debut.

A rival of Essendon’s champion Albert Thurgood (q.v.) and Richmond’s George Bayliss (q.v.), ‘Long Dave’ McNamara left his mark on the game as the greatest distance kick of all time who specialised in the rugby-style place kick; in a game against South Melbourne at the Junction Oval in 1907, one such kick was said to have gone 94.5 metres that today stands alongside some of the longest all-time bombs. A dispute with St. Kilda in 1909 saw McNamara join Essendon in the VFA (1910-12) where he played in back-to-back premierships (1911-12) and achieved the distinction of the first player in league football to kick a century with 107 goals (1912); in one match he kicked 18 goals from centre half-forward. Wooed back to St. Kilda as captain-coach in 1913 a protracted battle saw him stand out the season; in his first game back in 1914 he kicked six of the team’s eight goals and went on to become captain-coach in his last two seasons.

He was twice voted Champion of the Colony (1907, 1914) – the equivalent of the Brownlow Medal – and in 122 Victorian Football League games kicked 187 goals. But even his legendary kicking failed him, for McNamara has the distinction of kicking the second most points in a game – one goal thirteen points against Richmond in 1922. Before retiring from football, he played as an amateur for Ormond (1924-32) and returned to St. Kilda as a committeeman, vice-president and president in 1938; he was voted in St. Kilda’s ‘Team of the Century’ and an inductee in the inaugural Hall of Fame in 2003. McNamara later took up his love of horses to become a trainer on the pony racing circuit at Richmond, Fitzroy and Ascot and for a period served as president of the Victorian Racehorse Trainers’ Association. Later in life he was a charity worker for many hospitals and held several life governorships.