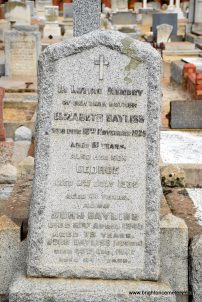 Born in 1893, the son of John Bayliss (d 1940) and his wife Elizabeth (d 1925) who went on to become a champion footballer with the Richmond Football Club (1914-23) where he played 89 games kicking 217 goals and was a member of the 1919 losing and 1921 winning premiership team; in their 1920 premiership year, which Bayliss missed through injury (“attack of tonsillitis”), he topped the league goalkicking list with 63 goals. At 179cm tall and 74.5kg, Bayliss was described as “an opportunist forward…with a deadly left foot shot for goal” who was recruited from Balmain Church of Christ team; he later went on to play with Albury, Footscray (1925, 9 games 18 goals), Ararat and Camberwell before retiring from the great game.

In a glowing feature, The Herald wrote that he;

“will always be remembered as one of the most glorious kicks League football has known. Many place him second only to Dave McNamara (q.v.) in distance kicking and they claim that he was more accurate than the tall record holder. Both were left-footers. Bayliss was a born footballer with a natural flair for kicking…renowned for clever position play. Bayliss could leap with the best high flyers of the day. At his prime, he took a mark at Collingwood which old Richmond supporters still talk about [when he] went up high enough to kick team mate Mel Morris in the ear. And Morris [at 179 cm] was no midget!”.

Bayliss was also a renowned quick thinker; during a game against Essendon in 1921, the ball was punctured as it when through for a point. The Essendon full-back unwittingly kicked the ball to the umpire only for Bayliss to intercept it and kick a goal.

Residing at 142 Dover Street, Richmond, Bayliss was killed in tragic circumstances on 2 July 1935 and was buried two days later.