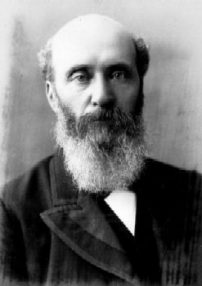 James Bell was born at Sanquhar, Dumfriesshire, Scotland in 1836 the son of James Bell, store-keeper and Anne née Turnbull; before he migrated to Victoria in 1857 he had already established a business on his own. At Dunolly it did not take long for Bell to become a successful store-keeper with Melbourne Punch noting years later that he “quickly evinced that characteristic desire peculiar to the Scot to be at the top of the tree” and by 1862 he had another store at St. Arnaud. He later went on to become first mayor (1862-65) in the local Dunolly Municipal Council (1862-77).

In state politics, Bell stood for the Legislative Council seat of North West Province (1882-1904) as a ‘moderate’ favouring free and compulsory secular education, trade protection, Federation and equitable taxation; such was his popularity that until his retirement, he never had to recontest again. Described as one of the “best tempered of men, genial and kind”, Bell served as Minister without portfolio (1886-89) and Minister for Defence (1889-90) after the death of Sir James Lorimer (St. Kilda Cemetery); in 1889 he was president of the Royal Commission on gold mining. As a grain merchant, his company “James Bell & Co” became one of Victoria’s largest exporters of wheat with branches in Adelaide, Sydney and South Africa. Bell was caught up with the wicked ways of the notorious land speculator (Sir) Matthew Davies (Cheltenham Pioneer Cemetery) as a fellow director of the “Mercantile Bank” (333 Collins Street, Melbourne) that collapsed during the depression. Bell was charged on 4 January 1893 along with other co-directors with “conspiring to issue a false and fraudulent balance sheet” in February 1892 when an emergency loan of £100,000 from the Commercial Bank was improperly used to strengthen the balance sheet; defended by Alfred Deakin (St. Kilda Cemetery) before Magistrate Joseph Panton (St. Kilda Cemetery) and seven JP’s he was acquitted.

Having moved to Melbourne in 1886, Bell resided at Sherbrooke – McMillan Street, Elsternwick where he died on 24 February 1908; his wife Elizabeth née Riddell and nine of their eleven children survived him. The Argus wrote;

(Reproduced with kind permission of the Victorian Parliament Library)