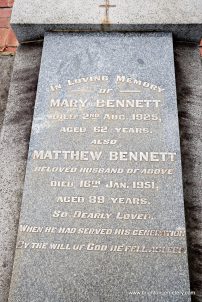 Born on 20 January 1862 at Carngham, Victoria the son of English born parents Joseph Bennett, farmer and Elizabeth née Temby. A dairy farmer near Catani, Victoria Bennett was elected a councillor of Koo-Wee-Rup (1925-51) and was twice Shire President (1931-32, 1941-42). He was a staunch supporter of the country farmer and served as president of the Catani branch of the Country party before being elected to represent the local seat of Gippsland West from 1929 to 1950; at the time of his retirement from State Parliament was the oldest member at the age of 88. A pioneer member of the Farmers’ Union which merged to form the Country Party in 1928, Bennett was “recognised as one of the party’s stalwarts”.