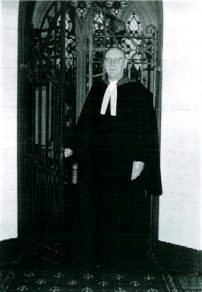 Migrating to Melbourne in 1916, Benson began his long association with the Methodist Church (1916-67), culminating with his appointment to the Lonsdale Street Wesley Church (1926-67). He initially served in the Hamilton district and later in Toorak (1918-22) where he came under the influence of Rev. William Fitchett (Boroondara Cemetery); years later Benson was to comment on Fitchett’s “fatherly influence”.

As a preacher, no man could match his spiritually challenging, well researched and eloquent sermons, yet his influence came through his column ‘Church and People’ with The Herald (1923-79), the controversial Pleasant Sunday Afternoon gatherings (1933-67) and through his ‘Questions and Answers’ program on ABC radio (1938-44) that allowed him to speak fearlessly on social issues. One overseas guest when asked what to do while in Melbourne, was told to see the Melbourne Cup and talk on the PSA; Benson’s grievance was with the priorities. Described by one critic as “the doyen of Melbourne’s wowsers” (On the introduction of Tattersall’s: “Do they believe that this bad thing will promote the morality of Victoria? They must know that it will swell the tide of paganism”), Benson was an astute fund raiser who used his memberships of the Savage and Melbourne Clubs to increase donations to the Wesley Central Mission; the “Irving Benson Court” for the elderly in Coburg is named in his honour. A noted book collector, Benson served as chairman of the Public (State) Library (1940-66) and also the combined Public Library, Museums and National Gallery of Victoria (1942-46). He wrote a number of books including “A Century of Victorian Methodism” (1935) and “The Man With the Donkey” (1965).

Knighted in 1963 – the first Methodist minister of any country – Benson died at Bodalla Nursing Home, Kew on 6 December 1980 survived by his second wife.