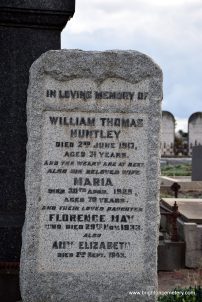 “Ex-Councillor William T Huntley died last Saturday at his residence in Thomas-street at the age of 72 years. He had not enjoyed the best of health in recent years, but the announcement of his death came as painful surprise to the community. He leaves a widow and 3 sons and five daughters. He was born in Collingwood in 1845, and two years later came to reside in Brighton with his parents.

The late Mr Huntley was a member of the Brighton Council for over 30 years. He represented the East Ward during that time. He lost his seat in 1893, when Messrs Cheeseman, Stone and Bent were returned, but six years afterwards he won in a straighout contest with the late Cr Cheeseman, who, in turn, was re-elected on the death of Sir Thomas Bent. Mr Huntley retired in 1911 owing to ill-health, and the Council passed resolutions thanking him for his long and faithful service to the town, and expressed appreciation of his actions as a councillor. He enjoyed the unanimous goodwill and esteem of his brother-councillors for his unassuming manner and reasonableness on all matters. His opinions were never aggressively expressed, but were respected as being invariably sound and sensible. He was liked generally by all with whom he came in contact, as one who could see both sides of a question and gave credit for honesty of purpose of others. As a cricketer, he took a keen pleasure in the game, both as a player and a supporter, and always could be relied on for material assistance in old-time games between Brighton and other councils. He followed the district cricket for many years as president of the Hurlingham Club.

The funeral took place on Monday at the Brighton Cemetery, when Rev W Ham conducted the service at the grave. The pall-bearers included Crs T Wilson, Francis, and Satchwell, and ex-Crs Macpherson and Stone. The arrangements were carried out by Messrs J Monkhouse and Son, of Carpenter-street, Brighton”.