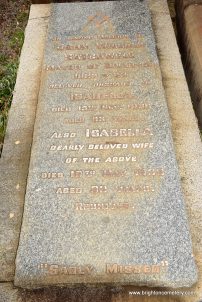 Born at Geelong, Victoria on 26 July 1853, the son of John Satchwell and Mary née Hudson and educated at the prestigious Geelong Grammar School (1865) before being apprenticed as an architect where he won a number of prizes. Satchwell was later to spend 33 colourful years in the police force (1878-1911), stationed initially at Eaglehawk, Victoria and later in charge of Terrick, Mitiamo, Raywood, Carisbrook, Wedderburn, Wycheproof and Elmore before being appointed senior constable at Carlton in Melbourne and sergeant in charge at Newport, Richmond South and sub-inspector at the Russell Street barracks before retiring in 1911. Soon after he joined the force on 30 August 1878 (number 2974) as a mounted constable, he took part in the search for the infamous Kelly gang of outlaws and in 1889 while posted at Newstead saved a number of lives in floods and was awarded the valour badge. Elected to the Brighton City Council (1916-36, Mayor 1922-23) he resided at Kilnoorad – 32 Cluden Street, East Brighton.