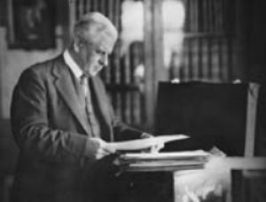 Henry Ambrose Hunt was born in London on 7 February 1866, the son of Edwin Hunt, engineer and Annie née Padley and educated at Dartford Grammar School; he spent three years in St Petersburg, Russia where his father, a marine engineer was involved in the design of battleship engines for the Czar.

In 1884 the family migrated to Sydney and he soon began working with the Observatory under Henry Russell (Waverley Cemetery). Two years later he transferred to the Meteorological department where he gradually rose to the position of acting Meteorologist in 1904 responsible for the preparation of the daily weather map. In late 1906, Hunt was appointed first head of the newly formed Commonwealth Meteorological Bureau in Melbourne (1906-31) an onerous position that involved introducing uniform meteorological methods as well as the development of the bureau through years of under funding into one able to meet the ever increasing needs of industry and the civil population. He developed a number of new theories; his book “A basis for seasonal forecasting in Australia” (1929) led to new grounds in the relationship between the weather cycle and droughts.

Described as “somewhat reserved and mild-mannered”, the satirical Melbourne Punch had a field-day featuring Hunt in the popular “People We Know” series. On meteorology;

“it is a science of paradoxes and absurdities…the only quack science which is solemnly accepted in the world today”.

On predicting the weather:

“the meteorologist is often very wrong, unless, like the astrologer…he phases his prophecies in such ambiguities as will cover anything that may happen”.

“he is execrated, and pitied, and despised all because he cannot achieve the impossible”.

“the grave of weather experts’ reputations”.

“the ordinary citizen knows accurately what the weather will be 300 days but needs help on the other 65 days…and the curious feature of the business is that on these 65 days the professional prophet finds his skill desert him”.

And finally, on the man himself, Punch described Hunt as a;

“pleasant, meek, well-fed gentleman, who seems quite out of place in control of such an untameable gang as the Australian weather elements…it would be hard to say what his percentage of correct predictions is, but this is certain, that it would be a high one”.

Before his forced retirement on 6 February 1931, Hunt was acknowledged as the foremost expert in Australia with a “world record as a weather forecaster” with an 87% strike rate. He resided at 34 Martin Street, Elwood where he died of myocarditis on his 80th birthday.

(Image reproduced with kind permission of Bureau of Meteorology)