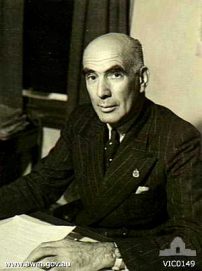 On returning to the public service, Langslow joined the finance branch of the Department of Defence later serving on the Civil Aviation Board and the Air Board from 1936; Langslow was found to have been jointly responsible for “bungling the installation of (new navigational) beacons” due to his “insistence on the limitation of expenditure” that contributed to the Kyeema air crash in which 18 persons were killed at Mount Dandenong on 25 October 1938. Appointed first secretary of the new Department of Air (1939-51) a position he served until his retirement , Langslow was left with a difficult job “to ensure the most economical expenditure of public funds”; his uncompromising nature made him unpopular with the RAAF who “usually responded with mild to strong dislike of him, or, occasionally, with reluctant deference”. His longevity in the position at a time when government ministers and air force officers came and went, allowed Langslow to build up a “detailed understanding of the workings of government and a deep academic knowledge of aviation” that was exercised for good of the air force.