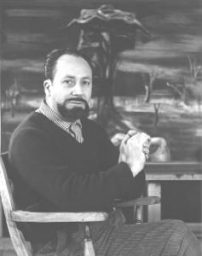 One of Australia’s greatest artists, Tucker was born on 29 December 1914 at 90 Francis Street, Yarraville, the youngest of three children to John Tucker a railway worker and Clara née Davis; his paternal grandfather Albert Edwin Tucker (Melbourne General Cemetery) was a politician and prominent Fitzroy identity. Growing up as a kid of the depression era in Malvern, Tucker left the local Spring Road state school at the age of fifteen (“a lively, cocky kid”) with eyes set on becoming an artist; he found work in commercial art at “Foy and Gibson’s” (“pure exploitation”) and after a series of similar positions found it tedious and repetitive as a career.

Tucker’s training as an artist in the 1930s was informal, largely self-taught and influenced by Marxism; fastidious, fearlessly independent and self-absorbed with a combative personality, his first turning point came in 1937 when he enrolled in art school, gave up full time work and achieved critical public recognition at the Victorian Artists’ Society autumn exhibition for “Self Portrait” (1937) (“confrontational, haunted and passionately self-conscious”). But financial success eluded Tucker until the early 1960s making for a long period of precarious living largely supported by the generous patronage of John and Sunday Reed née Baillieu who were both committed to modern contemporary art through the creation of Heide (1935-81). Described as the ‘technician’ of the 1940s “Angry Penguins” group of artists that included Arthur Boyd (q.v.), John Perceval (q.v.), and (Sir) Sidney Nolan (d 1992), Tucker’s paintings often focussed on the unrest and savagery of the times.

In 1941, he married fellow artist Joy Hester (Box Hill Cemetery) (“sunny, casual and extrovert”); his self-absorption and obsession with Hester during the ten years they were together would both inspire Tucker’s art to a new level and leave an emotional labyrinth of feelings in which his art would never fully recover from. His thirty-odd “Images of Modern Evil” series (1943-47), depicting the sordid behaviour of prostitution and soldiers on leave during WWII with its signature crescent mouth icon are his greatest works of art; inspired by his reactions to his time at Heidelberg Military Hospital during his short stint in the army (“brutish, unsavoury environment”), the Leonski ‘brownout’ murders (May 1942) and the images of wartime Melbourne, the series “quivers with ambivalence and sexual tension, pleasure and terror, fear and loathing”.

Hester’s sudden departure in 1947 left Tucker (“a man whom she respected but was not in love with”) with a yearning to get away from Australia; he spent the next thirteen years in Europe and America but financial success continued to elude him. Still scrambling to survive as an artist with a terrifying sense of failure, Tucker’s return to Australia in 1960 coincided with the rise of commercial galleries and a boom in Australian art that would deliver Tucker not just the financial success that had evaded him for nearly three decades but also prominence and reputation in the art world. But while his time overseas had hardened his resolve as an artist it had also weakened his confidence and his art never reached the critical heights of the “Images” series. Along with Nolan, Tucker popularised modern art in Australia through his ‘antipodean images’ – Tucker with his “Explorer” series (1958); and Nolan with the famed “Ned Kelly” paintings.

(Image by permission of the National Library of Australia, nla.pic-an23531481)