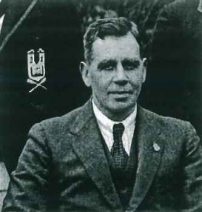 Born at Ballarat, Victoria on 16 April 1883, the eldest son of William Tulloch, brewer (“Tulloch’s Breweries”) and Agnes née Wheeldon, Tulloch was educated at Melbourne Church of England Boys’ Grammar (1897-99) where he distinguished himself as a sportsman; in 1899 as a member of the first eight-oared schoolboys’ race that included Stanley Bruce (1883-1967), future prime minister of Australia, he won the first school boat race rowed in Australia defeating Geelong Grammar. Gaining experience under his father as a brewer, Tulloch was later employed at “R Mark’s & Co”, Maldon (1904-06) and “Swallow Brewery”, Perth (1907-09). At the time of his death he was employed with “Victoria Brewery” in East Melbourne (1919-26).

At the outbreak of hostilities, Tulloch was a commissioned officer with the citizen forces, and enlisted with the rank of Captain in late January 1915 with the Western Australian-raised 11th Battalion. At the landing at Gallipoli, Tulloch’s name will always live in the annals of Australia’s military history.  With orders inculcated into all officers and other ranks to advance, and when in doubt, to keep advancing, on that fateful morning amid all the chaos and confusion, Tulloch in command of ‘B’ Company found himself and about sixty men on the south-west slope of Battleship Hill – his immediate objective and some 1,000 yards beyond the settled line.  Only one other group that morning managed to gain their objective.

Finding the situation hopeless, Tulloch ordered his men to retire some 500 yards having held the position against all odds for half and hour. While sheltering near the edge of Malone’s Gully he was badly wounded in the leg. He returned to Australia in February 1916 to recuperate and did not return to his unit until October 1917; he was believed to have been gassed during the Second Battle of Passchendaele. Returning to the unit in May 1918, he took part in all the units’ operations until given temporary command of 12th Battalion in September 1918. He was awarded the Military Cross on two separate occasions, the first on 23 August 1918 near Chuignolles, when in charge of two companies to capture Froissy Wood. He led his men with great dash under heavy machine gun fire overcoming all resistance until he gained the objective.

Likewise on 18 September, while in charge of the left attacking company on the Hindenburg Outpost at Hargicourt near Villeret, with two other men he led a spirited assault on two machine gun posts killing the crew with his revolver and enemy stick bombs capturing six prisoners. It was in this battle that Allied intelligence revealed that the German soldier refused to fight against the Australians. He was later promoted to command the 12th Battalion.

Returning home in August 1919, Tulloch continued as a brewer and in 1921 was gazetted Lieut-Colonel, 22nd Battalion, Commonwealth Military Forces; he was also an original member of Legacy. While head rowing coach of Melbourne Boys’ Grammar School (1921-26), he was murdered early on the morning of 8 May 1926 and was accorded a funeral with full military honours; thousands of mourners lined the mile-long funeral procession along St. Kilda Road (“every section of society was represented in the crowd…so still was the throng that the rattle of breach bolts as the cartridges were driven home, was heard to its farthest limits”). On 15 April 1908 in Perth, he married Lilian née Temby (d 1962); they had no children.