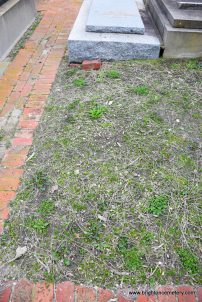 Born at Hanover, Germany in 1864, Diedrich Ueckermann served as the Caulfield City Council’s head gardener, a position he held during the Great War. His loyalty to Australia was brought into question prompting this report in the Sandringham Southern Cross:

“The loyalty of Mr Uickerman [sic], head gardener of the Caulfield Council, has been questioned, but after two investigations the Council have expressed their confidence in him. On Tuesday, the Council received a letter from Mrs Perkes, asking that a deputation of women be received to discuss the question. Mrs Dixon also wrote as a Red Cross worker, expressing surprise and indignation that the gardener was still employed, and she considered the employment of Germans in public positions was hindering recruiting. She urged the Council to brush away the cobwebs from their eyes, and put on the cap of reasoning.

The special committee appointed to investigate the matter submitted a declaration, in which the gardener stated he was born in Hanover in 1864, prior to its amalgamation with Germany. His father joined the Hanoverian Army when war was declared on the Prussians, and ten years later, not being satisfied with Prussian rule, sailed for England. At the age of 16 years he (the gardener) left London for Australia, where he had resided ever since. He was naturalised, and had married an Australian-born woman of British parents. He could not speak German; had not corresponded with the German Consul, or anyone in Germany, and his children were taught in the Victorian State schools. He had invested in the War Loan, and by personal effort had assisted the Red Cross Society. Two of his brothers, who took part in the Boer War, were wounded, and were now receiving pensions from the British Government.

Cr Thomson moved the adoption of the report. He hoped that at last the people would be satisfied. The gardener was one of the best servants of the Council. If the gardener were not a loyal subject, he (Cr Thomson) would have resigned long ago.

Cr Wood seconded the motion. He said the gardener and his family had exhibited loyalty in a manner that many of the native-born Australians were not doing.

Cr Phillips said the report was very satisfactory. He ventured to say that no honest ratepayer would ask the Council, in the face of the declaration, to discharge the gardener.

The motion was carried.”