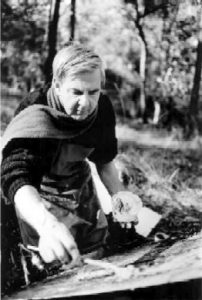 Without doubt one of Australia’s greatest artists of the 20th century, Boyd is the most recognisable of the famous artistic dynasty and was born on 20 July 1920 the eldest son of Merric Boyd (q.v.) and Doris née Gough (q.v.) and brother of Guy (q.v.). Growing up with the “Boyd innocence” at Open Country – the family’s creative haven at Murrumbeena, Melbourne – Arthur showed exceptional talent from the start; gentle, shy and hesitant, by the time he left the local state school he had great difficulty spelling (“My God I feel this not being able to spell. It just about drives me mad”).

In 1942 he met twenty-one year old art student Yvonne Lennie at a life drawing class and through his future wife (“she brought exceptional grace and strength in the role of artist’s wife”) mixed with the likes of Albert Tucker (q.v.), Sidney Nolan (d 1992) and Joy Hester (Box Hill Cemetery) coming into contact with the art patrons John and Sunday Reed; Boyd was more content with the welcoming and relaxed intellectual atmosphere of Open Country than the ideological debating hot house of Heide (“I found it was best to keep a fair distance because you could get eaten up and I didn’t like that”). After serving with the Cartographic Company during the war (1941-44) where he met John Perceval (q.v.) he started “Arthur Merric Boyd (AMB) Pottery” (1944-55) in partnership with others before embarking on painting full-time.

In April 1958 Boyd achieved his first critical break with the showing of the “Love, Marriage and Death of a Half-Caste” (“Brides”) series (1957-58) at the Australian Galleries; inspired by his visit to central Australia in the 1950s he was horrified by what he saw, of Aborigines herded like cattle at Alice Springs and half-castes living in squalor in shanty towns. Feeling the need for new experience rather than disillusionment Boyd headed for London the following year with the financial backing of Anne and Thomas (Tam) Purves. Tucker who had been making a precarious living in Europe since 1947 had warned Boyd of the “incredibly tricky, complex, corrupt” life and to bring “bags of money” as the English “will reject Arthur’s painting on sight”. But Boyd achieved financial and critical success soon after this arrival; in June 1962 he followed in Nolan’s footsteps to have a retrospective at the Whitechapel Gallery (“an accolade second only to…the Tate [Gallery]”). While Boyd would spend 1959 until 1974 alternating between Highgate (London), Ramsholt (Suffolk) and Paretaio (Tuscany) his yearning for a home in Australia would remain strong. From portraits (“Portrait of Max Nicholson” 1943), impressionism (“Reflected Rock and Riverbank Winter” 1981), nudes (“Seated Figure by Creek” 1972), biblical (“Nebuchadnezzar’s dream of the tree” 1966-69), autobiographical (“Potter’s Wife in Garden at Murrumbeena” 1964-67), expressionism (“Melbourne Burning” 1946-47) to surrealism (“Shearers Playing for a Bride” 1957), Boyd’s works covered a diverse range of themes and evocative subjects, many of which have had a profound effect on society.

Gentle, sensitive, compassionate, and tenacious, Boyd was above all noted for his generosity (“we own nothing, all we do is possess things for a short period; you don’t even own your wedding ring, nothing”) which was exemplified on Australia Day 1993 when his family gifted to the nation his beloved Bundanon and Riversdale properties on the Shoalhaven River, New South Wales after years of bureaucratic and political indifference. The Boyd vision was for the gift to be a place where “his tribe could get together, paint, write, make music, explore the bush and the river, or just enjoy themselves”.

While travelling back to Sydney for the official opening, Boyd suffered a heart attack in February 1999, and died on 24 April 1999 at the Mercy Hospital while convalescing in Brighton survived by his wife Yvonne whom he married in March 1945 and his three children. Former Primer Minister, Paul Keating (1991-96) who accepted the family gift on behalf of the nation paid tribute to Boyd’s remarkable contribution to Australia:

“It has fallen to people like Arthur to define what it is to be Australian on canvas and to let us understand that we’re not Europeans anymore, that we’re not anything other than Australians. This is the debt we really owe him”.