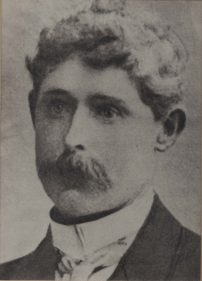 Born on 15 December 1864 at the gold mining settlement of Springdallah, Victoria the youngest of five surviving children (“a son with fair hair and blue eyes”) to Irish born Patrick Bowen, a miner and his wife Catherine née Mooney. After his education at nearby Piggoreet local school, he left at the age of sixteen and headed to Melbourne (“a place of fascination”) and quickly found work as a labourer in the booming 1880s; he later worked on the construction of the cable tram network. By 1892, Bowen was working in a scrap metal yard at North Melbourne where he later became a partner (“a born entrepreneur”). The firm branched into the second-hand timber trade through demolition contracts which proved to be so lucrative the partners decided to go their separate ways and Bowen leased premises next door at 127 Dryburgh Street near the corner of Arden Street (“an ideal location for a timber yard”). He had found his calling. Soon after he formed an enduring partnership with his brother-in-law Redmond Pomeroy (d 1925) (Melbourne General Cemetery) on 29 April 1894 as “Bowen & Pomeroy”; the partnership between the two families would continue until 1954.

Their personalities were in stark contrast; Bowen a natural leader of men, generous and approachable who treated them equal; and Pomeroy quiet, gentle, steady and conservative, at unease amongst the men in the timber yard. Amid the after effects of the bank crash in 1893 (“the building trade was one of the worst hit”), the firm weathered the downturn with the increased demand for cheaper second hand timber. By 1899 they had branched into the supply of new timbers and six years later second hand timbers had become “a minor position in overall sales”. On the back of expansion the firm achieved record sales (“a business on the rise”) until the onset of the Great War from £10,314 in 1906 to over £56,000 in 1913 serving some 200 different builders. During the war, the building trade slumped and numbers fell from 102 to 59 as men enlisted; returned soldiers were welcomed back into the company.

In 1919, “Bowen & Pomeroy” branched into timber production with the joint formation of “St. Leonard’s Sawmill Company” at Toolangi to secure a guaranteed supply of hardwood then difficult to obtain but the venture ceased in January 1924; CJ Dennis (Box Hill Cemetery) the poet of “The Songs of a Sentimental Bloke” (1915) was a shareholder. Amongst the contracts for timber supplied include the Essendon Methodist Church (1915), the Williamstown (1913) and Footscray Town Halls (1914), Trades Hall in Carlton (1917), Menzies Hotel (1920s) and the Geelong North Ford factory (1925) a turning point in the company’s fortunes as it enabled the firm to compete successfully for contracts for large construction projects following the installation of an imported Mershon roller recut bandsaw. On 9 February 1924, Bowen’s second wife, Mary née Poer (“a warm hearted, generous women) whom he married on 16 July 1907 was killed in a car accident on the Geelong Road outside Footscray while heading to Geelong to spend the weekend; Richard escaped with minor injuries.

Residing at Springdallah – Chatsworth Avenue, Brighton he died from myocarditis (heart disease) on 14 October that year aged 59 with an estate valued for probate at £51,858 (£7,538 real estate and £44,320 personal property) survived by his two children who he adored; John (q.v.) would rise to lead the company. On the day of his funeral, employees gathered at the corner of Nepean Highway and North Road as a mark of respect, a fitting tribute to a man who had been like a fellow worker to all; an employee once remarked that “his word was his bond and he treated men as his equal…he expected men to do the right thing and do a fair day’s work [but] he paid his staff well and gave them extra if he know they had earned it”. In July 1891 at St. Mary’s Catholic Church in St. Kilda, he married Mary Ann née Pomeroy nine years his senior (“a cultivated women…accustomed to an independent lifestyle”); she died from a brain haemorrhage on 2 June 1905.