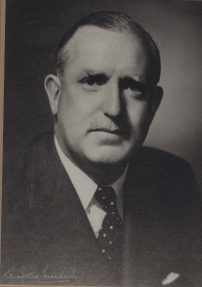 Born in 1909 the eldest of two children to Richard Bowen (q.v.), a timber merchant who co-founded “Bowen & Pomeroy Pty Ltd” (known today as “Bowens, Timber and Building Supplies”), and his second wife Mary née Poer. The untimely deaths of both co-founders within a space of three months in the mid-1920s was a critical junction for the company; Bowen senior’s will stipulated that his shares be held in trust until Jack reached the age of 25 (“this proved a wise stipulation”).

Educated at Xavier, he longed to be part of the company and left school in 1926 aged 17 (“against his aunt’s advice”) and under the tutelage of two able deputies in Jack Dowling (“the salesman”) and Charlie Barrass (“the practical timber man”) bided his time working primarily in the office. Bowen could do little but see the company weather the storm of the Timber Industry strike (“the strike caused havoc at Bowen and Pomeroy”) and great depression of 1929 that saw staff levels fall from 85 in 1929 to 30 in 1931; characters like Alf ‘Baldy’ Durbar (“highly skilled and cantankerous…a stickler for detail [whose] only weakness was the Footscray football team”) who had been employed for over 30 years were laid off. The company was in such dire straits having suffered consecutive losses that led to the formation of a new company “Bowen & Pomeroy Pty Ltd” to realise the timber stocks of the old company (renamed “B & P Investments Pty Ltd”); Bowen emerged the majority shareholder at the same time the Pomeroy family reduced their interest.

By 1933, the company had turned the tide but more importantly emerged streamlined and a more efficient enterprise with a crop of enthusiastic talented men who were to play a major role in the future. In contrast with WWI, the outbreak of the Second World War saw a seemingly insatiable demand for timber even though from January 1942 a total ban on all private buildings had been enforced; timber merchandising was added to the list of ‘protected industries’ allowing employees in the armed forces to be released. The end of the war “heralded the beginning of a remarkable period of prosperity” for the company that was to continue through to the 1960s fuelled by a back-log of work from six years of little building activity, the return of servicemen and increased immigration.

During the post-war period, Bowen modernised the company by erecting a new joinery shop (1947) and moulding mill (1945), but the most significant decision was to branch into hardware retail (1947) albeit in the traditional form of behind the counter service. Described as “tall with broad shoulders and a commanding presence”, Bowen was above all generous and through his initiative the company donated money to various charities; he soon earned the respect of his peers in the industry with a reputation for integrity (“he did not have the charisma of his father”) and went on to serve on the executive of the Timber Merchants Association for 32 years.

In the 1960s, the company faced emerging challenges with the introduction of new forms of substitutes of building materials; the concentration of building activity in the outer suburbs; and increased competition. But Bowen was an able strategist with a skill of blending conservatism with progress; in 1960 the company introduced a formal cadet training program that was acknowledged within the industry (“one of the most interesting and progressive moves…in the field of personnel training”); opened the first suburban branch at Mount Evelyn (1966); sold land at North Melbourne to finance the establishment of “Long Island Timber Company” (1970), a bulk timber supply outlet at Hastings; and introduced the concept of accounting budgets then unheard of in the industry (1963) (“Bowen and Pomeroy placed itself ahead of many of its competitors”).

Residing at 6 Cosham Street Brighton, Bowen died suddenly from a heart attack on 9 May 1971 aged 61 after 40 years as managing director and was survived by his wife Marie née Hourigan whom he married in March 1935; his eldest son John (b 1943) succeeded his father on his death (“thrust reluctantly into the position”) in what is a rare example of a family owned and controlled business founded over 125 years ago.