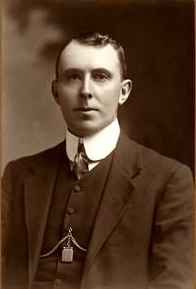 Born on 9 November 1880 at Balmoral near Hamilton, Victoria the son of William Blakey, woolclasser and Louis née Woodford and educated at the local primary school. Active with the Clerks’ and later the Australian Railways Union, Blakey became secretary of the Hamilton branch of the Australian Labour Party; he later served as a member of the State Executive (1906) becoming State Secretary in 1912. Between 1910 and 1917 he was elected as a Labour Senator and served on the Joint Committee of Public Accounts (1914-17) before being defeated. He later unsuccessfully sought re-election in 1925 and 1928.

As a director of the Australian Natives Association, Blakey was involved in the annual Adam Lindsay Gordon (q.v.) pilgrimage held at the Brighton General Cemetery. Married to Clifton née Hines in 1911, Blakey died on 4 July 1935 at Mooroopna Hospital after a long illness; The Agedescribed Blakey as “a good platform speaker, and had a genial personality”. James Scullin (Melbourne General Cemetery), then leader of the Opposition was a pallbearer at his funeral that took place on Friday 5 July at 3pm.

(Image reproduced by permission of the National Library of Australia, nla.pic-an23236633)