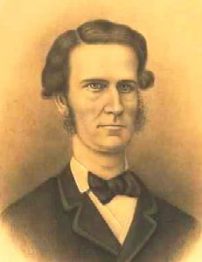 Undoubtedly one of the most significant interments at Brighton General Cemetery is that of Poet Gordon who was born at Cheltenham, England on 19 October 1833 (and not at Azores as has been widely published) the son of Adam Gordon and his cousin Harriet. Inheriting his mother’s fecklessness, his adolescence was a troubled one, marred by brawls, bouts of drunkenness and a warrant for his arrest that tested his father’s patience once too many; a position in South Australia was secured and he sailed on the Julia arriving in Adelaide on 11 November 1853.

“To My Sister”
My parents bid me cross the flood,
My kindred frowned at me;
They say I have belied my blood,
And stained my pedigree.
But I must turn from those who chide,
And laugh at those who frown;
I cannot quench my stubborn pride,
Nor keep my sprits down.

Horses were Gordon’s love, poetry his passion. Serving with the SA Mounted Police (1853-55) he was stationed at Penola in the Mount Gambier area and spent a period of two years of routine life of unremarkable incidents; his horse skills were noted by his peers and he proved a reliable trooper. It was also here that he met Rev Julian Tenison-Woods (Waverley Cemetery) which up to this point little was known of the poet in Gordon. With a formidable library of the likes of Thackeray, Dickens, Shelley and Byron, Tenison-Woods supplied the stimulus to rekindle Gordon’s passion in poetry. He also befriended William Trainor (q.v.), who apart from Tenison-Woods encouraged Gordon to publish his works; “The Feud” was his first and appeared in Border Watch on 30 August 1864. On the death of his mother in 1861 Gordon received a large inheritance and was suddenly a man of wealth. It also marked the start of his downfall.

He married Margaret née Park on 20 October 1862 and bought Dingley Dell a cottage near Port MacDonnell; pursued his love of riding and training steeplechasers; and made disastrous speculations in land. Where men upon failure could say they tried, Gordon was one who upon failure could never understand why, believing his family name would alone assure success. In January 1865 he entered the South Australian parliament (1865-66) on the urgings of the Mount Gambier landowners: his platform was against unlocking the lands, support of borrowing for public works and vowing to lobby for extra funds for the area.

But politics soon bored Gordon and he found more attraction in the Parliamentary library. He did however continue to write poetry and after the disastrous foray in land speculation in Western Australia he self-published his own works – “Ashtaroth” (1867) and “Sea Spray and Smoke Drift” (1867) but neither the reviewers warmed to his style and he made a substantial loss; it was rather a reflection of the uncompromising pre-conceived opinion of critics than the freshness of Gordon’s works. This failure soon led Gordon to Victoria in the form of an old friend Walter Craig of Craig’s Hotel, Ballarat whom he was able to lease livery stables from. But failure continued to dog Gordon.

In March 1868 he suffered a serious horse riding fall and suffered a fractured skull, broken nose, jaw and ribs; on 14 April his only child, Annie died after contracting enteritis; a nearby blaze destroyed the stables; and in September his wife left him. While staying with a friend in Melbourne, Gordon met the author Marcus Clarke (Melbourne General Cemetery) at the time editor of Colonial Monthly who introduced Gordon to the Melbourne literary scene including Tom Carrington (q.v.) and Henry Kendall (Waverley Cemetery). Thus, Gordon began one last foray into poetry with “Bush Ballads and Galloping Rhymes” (1870) considered his finest work producing such favourites as “From the Wreck”, “The Sick Stockrider” and “How we Beat the Favourite”. The day after publication on 24 June 1870 he committed suicide on the Brighton foreshore.

For Gordon, mistakes came too early and recognition too late whose recklessness and daring as a horse rider, open handed generosity and melancholy were ultimately his downfall. The stanza on his headstone from the poem “Ye Wearie Wayfarer” was popular to a generation of Australian school children:

Question not, but live and labour
Till yon goal be won,
Helping every feeble neighbour,
Seeking help from none;
Life is mostly froth and bubble,
Two things stand like stone:
KINDNESS in another’s trouble.
COURAGE in your own.

(Image by permission of the National Library of Australia, nla.pic-an5487725)