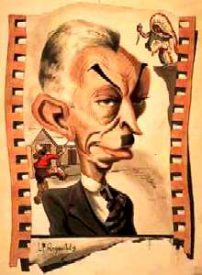 Recognised “as the father of the cinema industry”, Gibson was born in London and migrated to Victoria as a teenager. In 1900 whilst working for “William Johnson & Son” (18 Punt Road, Windsor) as a chemist, Gibson bought a film projector and began screening imported short ‘films’ with Millard Johnson. Their firm “Johnson & Gibson” established a highly successful circuit of ‘six penny pops’ in various Melbourne suburban halls on Saturday nights attracting huge crowds.

Gibson’s big break came in 1906 when the company formed a partnership with the famous Tait brothers (John and Nevin) to produce the world’s first feature film – “The Story of the Kelly Gang” (1906) filmed exclusively at Charles Tait’s (Springvale Botanical Cemetery) property at Mitcham over six days and costing some £1,000. In 1911 they merged their interests to establish “Amalgamated Pictures Ltd” and with Gibson as joint managing director the firm built the St. Kilda Theatre as a new studio and the following year Australia’s first luxury cinema the Majestic Theatre (Flinders Street, Melbourne); other companies were formed over the years and today, the Greater Union cinemas is a result of this alliance. The company continued to produce films on a modest scale from Fergus Hume’s “The mystery of a hansom cab” (1911) to “Painted Daughters” (1925). Described as “hollow-cheeked and grey-faced…a tireless hard worker” Gibson was awarded the OBE in 1920 for patriotic services to the community.

He died on 6 October 1929 at Dandenong and was buried by “WG Apps & Sons” the following day.

(Image reproduced by permission of the National Library of Australia, nla.pic-anan10046161)