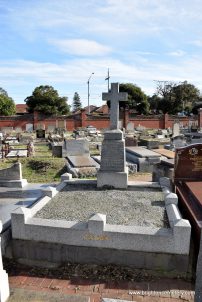 Only The Age newspaper reported the news of Canon Gason’s death on 10 November 1915 at St. John’s Vicarage, East Malvern “for many years a leading figure amongst the evangelicals in the Church of England”. His obituary noted that he was born in Ireland and “came to Australia as a young man” (possibly on the Candida arriving January 1877) where he took holy orders in 1882 “when he was ordained by the Bishop of Melbourne”. Two years later, he was ordained a priest, his first posting being at Eltham; in 1888 he was posted at St. John’s, Malvern, a position he held for twenty-seven years “about a record in Victoria”. Around 1908, Boyle was made a Canon of St. Paul’s Cathedral and two years later a “rural Dean of Malvern”. The Age said that “Canon Boule was exceedingly popular with his parishioners, and exercised an influence far beyond his parish…gentle and urbane in controversy, he enjoyed the respect of many outside the Anglican communion”. A son, Rev E Gason followed his father into the ministry.