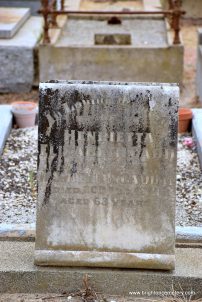 Walter Gadd who was believed to have been born in Adelaide, South Australia, is noted as being a member of the Fitzroy City Council serving a term as Mayor in the roaring 1880s “and was one of nine councillors who took place in the ceremony of laying the foundation at the main entrance of the Fitzroy Town Hall by Cr G Clauscen, then Mayor in 1887”. An active member of the Old Pioneers’ Association, Gadd “was widely known in the metropolis as an active worker in support of progressive movements”. His wife Henrietta predeceased him on his death on 26 June 1932; representatives from the Fitzroy City Council attended his funeral service held at St. Mary’s Church, Camberwell. In “Victoria and its Metropolis: Past and Present”, a brief entry reveals the;

“firm of auctioneers and house, land, and estate agents, consists of Messrs WS Gadd and JA Ross. Their business is carried on at 18 Market Buildings, Collins-street west, and at 375 Brunswick-street, Fitzroy”.

His wife Henrietta (d 1921) predeceased him.