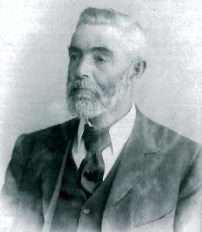 The man behind one of the most eloquent and enduring idioms in the Australian language – ‘furphy’ was a first generation Victorian born on 17 June 1842 at Moonee Ponds, the eldest child of Samuel Furphy and Judith née Hare who migrated from County Armagh, Ireland in 1841; his brother Joseph (Karrakatta Cemetery) wrote the Australian classic “Such is Life”.

After a limited education, Furphy was apprenticed as a blacksmith in Kyneton, before opening his own firm in Piper Street (1864-73). It was in the infant township of Shepparton that Furphy made his name. With an inventive and enterprising mind he established the town’s first blacksmith and wheelwright’s shop in Wyndham Street; as the town grew, so did the Furphy business and within a few years his name was known throughout the Goulburn Valley and today is still operated by fifth generation members of the Furphy family. Amongst the many agricultural implements that he patented were a crop stripper (1883), disc harrow (1889), ploughshares (1900) and toothed rollers (1902).

However, by far the firm’s most recognisable product was “Furphy’s Farm Water Cart”. Adapted especially as a means of carting water, they comprised of an 180-gallon cylindrical iron tank with an opening on the top and a rear tap, mounted horizontally on a wooden frame with cast-iron wheels that could be drawn by a horse. Coupled with the shrewd use of advertising the business and the classic verse of;

the water cart was to become the firm’s most popular item and some three hundred were produced annually for over forty years. More enduring is the word ‘furphy’ to describe a rumour, false report or absurd story. Used by the Australian Army to cart water around the camps of Egypt, the drivers of the Furphy watercarts were notorious for passing on “news” of doubtful accuracy thus a word was born.

A Methodist lay preacher for many years, Furphy retired in 1909 with his wife Sarah née Vaughan to live with their daughter Harriet Jackson at 63 Page Street Albert Park. He died there on 23 September 1920 aged 78.