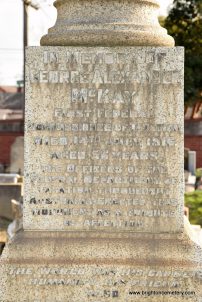 Born in Orange, New South Wales in 1860 the son of George McKay and educated at the local state school and later the Fort Street Model School. In 1877 he joined the New South Wales Public Service (1877-1901, 1910) working in survey branch of the Department of Mines where his “personal merit and the character of his work” was noticed and he rapidly rose through the ranks before being appointed chief draftsman and chief mining surveyor in 1899.

At the time of Federation, McKay was selected as an inspector for NSW and “did a great deal towards the establishment of machinery for the administration of the Commonwealth Public Service Act”. After briefly returning to the NSW Public Service as a member of the board, he was appointed first Commonwealth Land Tax Commissioner (1911-16) and later Income Tax Commissioner (1915-16) with the passing of the Estate Duty and War Income Acts (1915) to pay for the war effort which greatly increased his responsibilities; requiring “an intimate knowledge of financial questions and possession of business ability…his fairness was proverbial, and he was ever ready to afford taxpayers any assistance in his power in unravelling their difficulties”.

“The efficient state of his department and the zeal and acumen with which he directed the work of administration won the respect and admiration…Mr McKay was, in fact, regarded as one of the ablest and most conscientious men in the Commonwealth service…and was held in high esteem by successive Commonwealth Treasurers who were greatly guided by his opinion in framing taxing legislation”.

The Federal Treasurer, William Higgs (1862-1951) a pallbearer at his funeral paid tribute to McKay by saying “I know of no more able or devoted public officer…without a doubt he shortened his life by his special devotion to his public duties during the war”. He resided at 28 Wellington Street, St. Kilda.