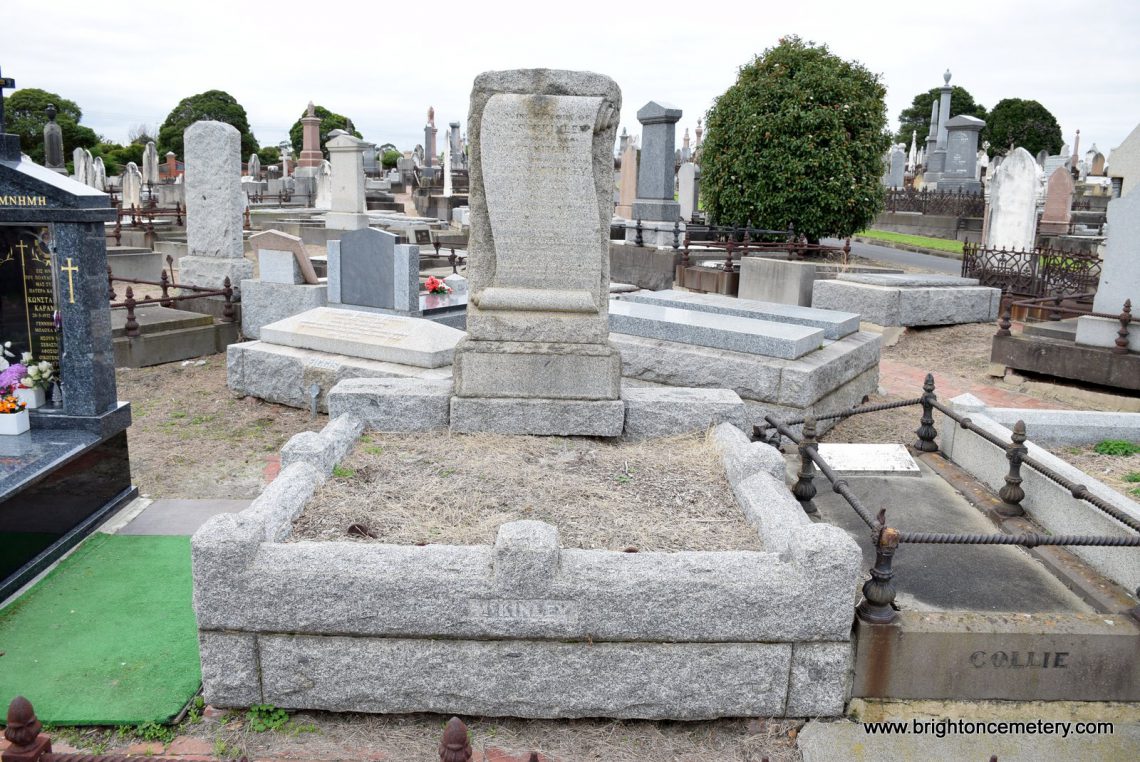 Born in Dublin, Ireland, who along with his brother Alexander (St. Kilda Cemetery), were well-known newspaper proprietors of many now-defunct publications. He began his journalistic career in 1869 with the purchase of the Talbot Leader before they purchased the witty satirical Melbourne Punch (1872-1920); in a lively, isolated and self-absorbed city as Melbourne it was a great success for many decades.

In 1881, James sold his interest in the paper to his brother and with Tom Carrington (q.v.) and Edmund ‘Garryowen’ Finn (1819-98) began the short-lived The World. He was to have an interest in the Melbourne Daily Telegraph and briefly controlled The Herald newspaper until the disastrous 1893 bank collapse saw both brothers unite on saving Punch where James edited the paper (1893-1908) until his untimely death in 1908.

During his time as editor, McKinley continued the paper’s tradition as the bane of the political and social set: to the Premier (Sir) Harry Lawson (1875-1952) Punch lamented “Castlemaine’s loss of a good footballer in return for a poor politician” (19 Dec 1907); to William Willis (1858-1922), politician and newspaper proprietor “a stout, florid man, whose vigour seems unabated by trouble, who challenges attention by his strong individualism, who talks in the racy vernacular of the street, and who may be relied upon to put up a good fight” (2 Aug 1906); to Sir William Zeal (Melbourne General Cemetery), President of the Legislative Council noted for his solitary recreations described him as living “in a shell detached from the rest of mankind” (14 Dec 1905); while the public servant and politician Henry Daglish (Karrakatta Cemetery) was described as “thin and consumptive…with big goo-goo eyes, cadaverous cheeks, long neck and floppy ears” (9 Feb 1905).

Married to Janet Mitchel nee Smith (q.v.), McKinley resided at Ibwiri – New Street, North Brighton, where he died from a suspected heart attack on 27 May 1908 after suddenly being seized with chest pains at the Punch office while reading proofs.