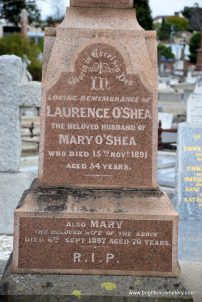 “A well known resident of Brighton, Mr Laurence O’Shea, after an illness of some duration, expired at his residence, Asling-street, on Sunday last. The deceased arrived in the colony in the fifties [1858], and was for many years identified with the licensed victualling interest. He formerly kept the Eureka Hotel, Richmond [1865-67]; but was better known to his townsmen as the proprietor and landlord of the Railway Hotel, Bay-street, in which he carried on business for a very lengthened period. His genial disposition secured him numerous friends, and his retirement from business was a compulsory one, his health having greatly failed him. He at one time represented the South Ward in the local council; and in respect to his memory, the members of the Town Council attended his funeral. A requiem mass was read over the remains of the deceased by Father Carey in the RC Church of St. James, and were buried on Tuesday in the Brighton Cemetery. The funeral cortege was very large and representative one. Mr James McDowall (q.v.) was the undertaker”.

A native of County Limerick, Ireland, O’Shea was a member of Thomas Bent’s (q.v.) group of power brokers who controlled the Brighton Council serving between 1881 and 1887. From 7 March 1873 until his death on 15 November 1891, he represented the Catholic faith on the Brighton General Cemetery Trust. O’Shea was also believed to have founded the “Brighton Club Hotel” – Nepean Highway, today an outlet of “Dan Murphy” wine and spirit merchants as well as the owner of the Black Prince Hotel, Hotham (North Melbourne) and the North Carlton Hotel, Drummond Street, Carlton. In the early 1880s, O’Shea was “engaged in pastoral pursuits” possibly in the Gippsland region where he owned extensive property.