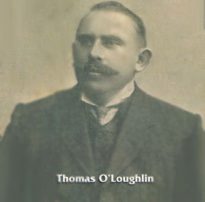 For someone who was created a Privy Chamberlain by the Roman Catholic Church, it is surprising little information is available on Thomas James O’Loughlin. The Argus obituary reveals some details. It notes that he “took a leading part in the reception of Cardinal Cerretti who visited Australia as Papal Leyate to the Eucharistic Congress in Sydney. In recognition of this role and his generous benefactions to the Roman Catholic Church, he was created a domestic Privy Chamberlain to Pope Pius XI”. On his wedding day in 1911 in Kilkenny, Ireland, he was created a Count of Rome by Pope Pius X; his benefactions to Catholic undertakings and charities was said to have succeeded £100,000. It is believed O’Loughlin donated a considerable amount towards the purchase of the Kew mansion Raheen in September 1917 along with other noted Catholic benefactors such as John Wren (Boroondara Cemetery).

On his death on 21 June 1929, Monsignor Lonergan said “there was scarcely a Catholic Institution in Australia that was not in some way or other indebted to him”. O’Loughlin resided at Tara Hall – 38 Hawthorn Grove, Hawthorn; his funeral service was held at St. Patrick’s Cathedral.

“Count Thomas James O’Loughlin and his wife Kathleen travelled to Ireland on the ‘Orsavo’ orient line travelling from Melbourne Australia to London England arriving on 21 June 1913 before sailing on to Ireland. They travelled with a daughter also Kathleen and a nanny called Delian Mescall. They travelled first class as you would expect.

The family also travelled from Melbourne to Ireland again in May 1920 via London England on red funnel line. This time the family was complete and they had five daughters – Kathleen aged seven, Margaret aged six, Helen aged four, Agatha aged two and Dorothy aged one. They travelled 1st Class yet again and Thomas was now 54 and his wife 39. His occupation was noted as a Grazier.

After Kathleen died they went on holiday to Hawaii from Sydney to Honolulu arriving on 30 December 1927. By this time Thomas was retired and widowed age 62. His daughters were Kathleen aged 15, Margaret aged 13, Helen aged 12, Agatha aged 10 and Dorothy aged nine. They were living in Melbourne, Australia.

Unfortunately they were all orphaned two years later when their father died.

Kathleen and Margaret travelled to England aged 18 and 17 arriving in London on 6 May 1931.

As you know, Thomas founded the O’Loughlin Memorial Church in Kilkenny, Ireland, in memory of his Kinsman, Mr J O’Loughlin of Ballarat, and he was married in that church in 1911 to a daughter of Mr J Murphy, of Ballybur Castle, County Kilkenny. Mrs O’Loughlin died several months before Thomas.” [From information kindly supplied by Claire O’Loughlin, Feb 2010]