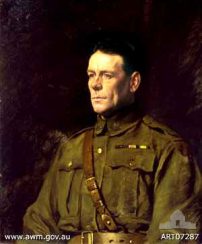 Born on 25 May 1885 at 25 Havelock Street, St. Kilda the son of Irish born Michael O’Keefe, diary proprietor and Catherine née Keleher. Enlisting for active overseas service on 29 August 1915, just three days before embarkation on the Wandilla with the rank of sergeant with the 10th Field Ambulance (No. 12367), he married Rose née Fisher (d 1942) on 3 June.

The unit at the time was part of the newly formed 3rd Division under the command of Major-General John Monash (q.v.) and O’Keeffe arrived in England where he undertook training at Salisbury Plain; his first engagement was in the meticulously planned Battle of Messines on 6-12 June 1917. In this battle, he was awarded the Distinguished Conduct Medal when under heavy fire he ensured both the clearing of casualties from the regimental aid-post to the safety of the advanced dressing stations; and with skill and coolness organised and directed stretcher-bearers to the rear, sometimes moving the wounded on a trolley drawn by a mule. Likewise at Ypres in October, O’Keeffe was awarded a Bar to his DCM, when in charge of stretcher-bearers at a forward post, a number of men were wounded and with total disregard to his safety under heavy shell-fire helped carry them in. It was largely due to O’Keeffe’s action that he was able to rally his men despite the unit having to endure the horrors of working in unbearable conditions of mud with little rest or sleep that were characteristic of the campaign. It has often been said that the lot of the stretcher-bearer was one of the most dangerous tasks of the soldier, the life-span so short that death or the suffering of a wound was inevitable; remarkably, there is no indication that O’Keeffe was wounded during his eighteen months of front-line service. Promoted just before the Armistice on 8 November 1918 to warrant officer class 1, that year, his commanding officer said of O’Keeffe;

“this NCO is a very good, reliable and practical man with good education.  He possesses a soldierly manner and exerts excellent influence and control over the men of this unit…”.

After returning to Australia in June 1919, O’Keeffe continued his civilian life as a plumber and faded into the immortality of being one of only 29 recipients of two DCMs from the AIF during the Great War. Residing at 8 Merriwoola Street, East St. Kilda, he died at the Repatriation General Hospital, Heidelberg on 2 September 1964.