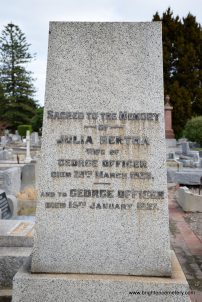 George Officer was a member of the well-known Officer-Blackwood family of pastoralists, the most prominent being his cousin Robert Officer Blackwood (Melbourne General Cemetery). He was born in Melbourne on 29 January 1867, the eldest son of William Officer (1836-1913), grazier of Zara Station at Deniliquin, New South Wales and Mary née Grace; Sir Robert Officer (1800-79), medical officer and politician was his grandfather. Educated at Geelong Grammar School where he distinguished himself in athletics, football (later with Essendon in the VFA) and cricket (“being captain of the team that held the reputation of being the best fielding side a public school had produced”); he was also awarded prizes for Divinty (1884), Bookkeeping (1886) and Divinty & Gym (1887). After leaving school he studied in London before returning in 1894 and entered the employ of the pioneering pastoral mercantile firm of “Dalgety & Co Ltd” where he remained for the next forty years as a woolbroker (“and for a considerable period was one of their wool experts”) before retiring in 1925. He then commenced as a stock and station agent in Melbourne.