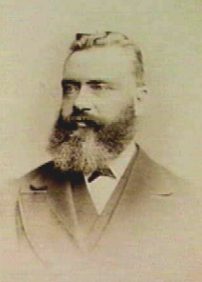 Born on Christmas Day 1831 at Tromroe, County Clare, Ireland the son of James Casey, a landowner and Maria née Coffey; educated in Galway he worked for a period in America before returning Ireland. In 1855 he decided to migrate to Victoria where he became prominent at Sandhurst (Bendigo) through his purchase of the Bendigo Advertiser and as a member of the Sandhurst Municipal Council (Chairman 1861).

Casey went on to represent the seat of Mandurang (1863-80) serving in various positions under (Sir) James McCulloch (1819-93) including Commissioner of Crown Lands and President of the Board of Land and Works and as first Minister of Agriculture (1872-75); as Justice Minister (1868-72), he introduced the system of appointing Magistrates to districts as opposed to representing the whole State. Known for his strong views during a radical period of Victorian politics, Casey was a somewhat controversial figure of the times, but above all a practical moderate between the opposing ideologies of (Sir) Graham Berry (Boroondara General Cemetery) and James Service (Melbourne General Cemetery). He is credited with being the driving force behind reforming the Lands Department and settling northern Victoria and the Gippsland region. A passionate supporter of Federation, in 1870 he chaired a standing committee and while acknowledging the union of colonies to be a long way off, he argued for reciprocal legislation on common areas.

The success of the International Exhibition of 1880 held in Melbourne was attributed to the work of Casey and James Munro (St. Kilda Cemetery) as executive vice-presidents. He was also a part owner of a number of newspapers notably the weekly Echuca based Riverine Herald edited by Robert Haverfield (Back Creek Cemetery) and in 1879 formed as syndicate with three other Victorian politicians and two Sydney investors to establish the Sydney Daily Telegraph; the paper wasn’t an immediate success. In 1880, he lost his seat which was attributed to his opposition to state-aid to church schools and became a director and first chairman of the Federal Bank established in 1882 by Munro which later collapsed in January 1893. Called to the Bar in 1865, Casey was later appointed judge of the County Court (1884-1900) where his deliberations “were always painstaking, clear headed and prompt” in which many of his judgements became legal precedents.

Impeccable in manners and appearance, he resided at Ibrikane – 50 Acland Street, St. Kilda where he died of influenza on 5 April 1913 aged 83.